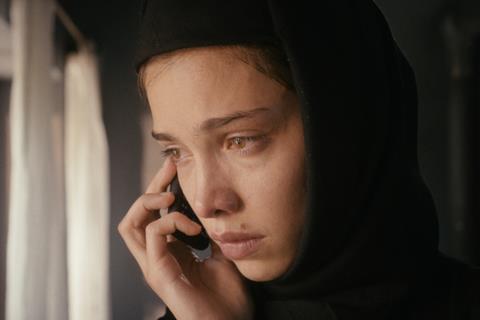 Miracle is a story of God and some very human monsters. The second in a planned trilogy, Bodgan George Apetri’s gripping, white-knuckle morality tale divides neatly between incident and investigation. The fate of a young nun serves as an exploration of faith’s value in a world that has gone to Hell. Apetri’s chilling, constantly intrguing film should travel extensively on the festival circuit and attract committed arthouse distributors.

Screams and howls convey the agony of what is unfolding and tie the stomach in knots.

Following on from last year’s Unindentified, which was cast and shot at the same time, Miracle is a self-contained story set in the same small town in Northern Romania. The first section focuses on 19-year old nun Cristina (Bugarin) as she secretly leaves her convent for a trip to town. Emotional but resolute, she is a young woman on a mission who also feels like a character in a prime period Hitchcock thriller. More innocent than Marion Crane perhaps but still heading towards a fate she doesn’t deserve.

Cristina shares a taxi with the driver and a doctor who is heading to the same hospital as her. The conversation between the men is mostly a lament on the state of the world and an attack on her faith. “Can you pray cancer away?” demands the doctor. “Can you vaccinate with holy water?”. Nostalgia for better times becomes a refrain throughout the film. A longing for the past is underlined by a soundtrack that displays a fondness for vintage music and the radio channels that play it, especially the recordings of folk singer and composer Gica Petrescu “our Elvis”.

Apetri’s unbroken takes create a fluid, compelling narrative that leaves the viewer wanting to know what happens next. His screenplay constantly prompts questions  and then provides enough information and revelations to deepen audience understanding of just what is at stake. The director’s approach is devastatingly effective in a lengthy sequence in the countryside filled with foreboding. You know that something awful is about to happen. The camera circles around what will become a crime scene, the rush of wind and the rumble of thunder adding to the atmosphere. Screams and howls convey the agony of what is unfolding and tie the stomach in knots.

The focus shifts to inspector Marius Preda (Parvu), a detective dimissive of faith who emerges as a righteous avenger. There are echoes of  classic Sidney Lumet films (1972’s The Offence, or Q + A from 1990) in the character of a policeman flouting the rule of law to satisfy his thirst for justice. His anger is fuelled by the attitude of those around him, including a convent wary of confirming Cristina as one of their own. “She wasn’t a nun, she was a novice, “ declares the frosty Mother Superior. A chief suspect who refuses to crack and a looming deadline for his release all add to the pressure for action.

Shot in a calm, composed manner that make tense conversations as edge of the seat as any car chase, Miracle is also unrelenting in the demands it places on the actors. Ioana Bugarin conveys the mixture of steely determination and emotional fragility that makes Cristina so vulnerable whilst there is a growing frustration in Emanuel Parvu’s Preda that makes his shocking behaviour understandable.

Miracle retains its strangehold for a swift-seeming two hours and ends with images that ensure plenty to chew over afterwards.