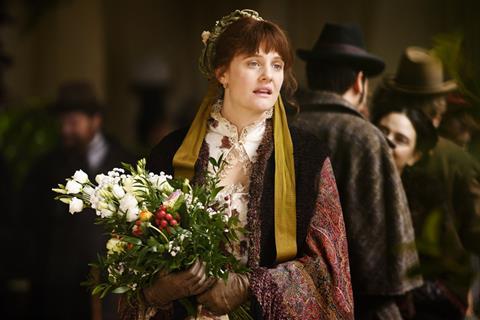 Susanna Nicchiarelli (Nico, 1988) has gone to great lengths to avoid the trappings of a period film in her – period film – Miss Marx. She aims for a suitably anarchistic tone for this not-quite biopic of Karl Marx’s youngest daughter, randomly breaking the fourth wall, wandering off into flashbacks, declining to identify characters, adding a play within a film, and even throwing in black-and-white photos of the UK miner’s strike which took place a century later. Set in London, but shot and designed in Italy, even the film’s essential aesthetic is deliberately off-kilter, wrong-footing the viewer with bursts of Chopin and shouty tracks from a contemporary LA punk band Downtown Boys. Nicchiarelli gets what she wanted, but something essential has been lost along the way.

Starting in 1883, on the death of Karl Marx, Nicchiarelli tracks his clever youngest daughter Eleanor (Romola Garai) as she makes a belated bid for personal freedom with all the triumphs and tragedies that might entail. She contrasts the high ideals of the social revolution which Eleanor, known as Tussy to her family, continues to agitate for, with the poor choices she makes in her personal life by falling in love and stubbornly remaining with a lying, cheating, opium-smoking playwright named Edward Aveling (Patrick Kennedy, in an under-written role).

A strong sense of Tussy and her causes – including, ironically, womens’ emancipation – emerges from the cacophony, making Miss Marx a female-skewing statement of intent. But, anachronistic dance routines aside, it’s not the first time in history, or in cinema, that a good woman has stood steadfastly by a rotten man’s side as he brings her down. The couple’s performance of the finale of Ibsen’s The Doll House (translated by Tussy) seems like a statement by Nicchiarelli, or perhaps it’s just another audience-deceiving feint. What’s clear is that, despite everything, neither Nicchiarelli nor her film can satisfactorily explain or understand Tussy’s choices, even having sacrificed so much screen time about an interesting woman and a vital cause to her self-sabotaging relationship. And that, in its own way, is the most dated element of Miss Marx.

The film looks so rich: the fabrics and the costumes and the interior decoration are Victoriana by way of Etro in a constant autumnal splurge of russets and golds. Nicchiarelli, apparently, made an artistic choice to colour and design along the lines of contemporaneous French impressionist paintings, which sets the image even further at a dissonance from Marx’s Highgate cemetery in London where the film begins. Tussy gives a confident speech paying full tribute to her late father’s long-lived marriage, but viewers will have to be eagle-eyed – or Marx historians – to figure out the other figures in Miss Marx’s complicated family tableaux.

Nicchiarelli skips through the figures in scenes set in kitchens and rug-filled writing dens populated by bearded pipe- and cigar-smoking figures such as Max Engels and, in flashback, Marx himself. She carves out Eleanor Marx as a somewhat lonely and isolated central figure, delivering her speeches straight to camera and visiting factories  where, in one fantasy sequence, a boy urges her down an alley to witness his blistered, dying mother. With her complex family and political allegiances, the sudden arrival of a half-brother, and a past that is only ever frustratingly hinted at, Eleanor urges women to fight for their emancipation and that of their children. Meanwhile, Edward floats around in velvet smoking jackets puffing on an opium pipe to the intense dislike of all her friends and family.

Nicchiarelli is extremely fortunate in that Romola Garai has the steady presence to hold such a rolling ship on course. Although she often looks as if she’s been stitched up into a tapestry, the actress commands attention as a defiant woman who was punkishly far ahead of her time.