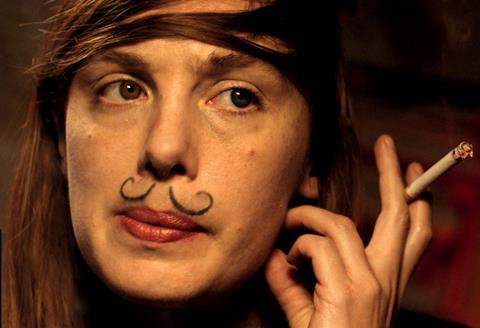 A fearless, powerhouse performance by Laetitia Dosch infuses every frame of Montparnasse Bienvenue (Jeune Femme), the kinetic, incident-packed portrait of rudderless yet resilient Paula, a 31-year-old woman in emotional free-fall. This first film by writer-director Léona Serraille is full of snap and surprises as energetic scatterbrain Paula ricochets from situation to situation after getting dumped by a lover — her former teacher and prominent photographer Joachim (Gregoire Monsaingeon) — with whom she lived for a decade. Following its debut in Cannes (Un Certain Regard) this should travel.

We meet Paula pounding on a door — first with her fist and then with her forehead — demanding to be let in. In a sequence at the hospital where the resulting gash is treated, we witness Paula’s manic gift for navel-centered gab and her oblivious knack for casually insulting the very people trying to help her. She’s a walking train wreck who manages to lurch from station to station as we look on. There’s literally never a dull moment.

Paula always has a line of banter and she improvises as if her life depends on it. She has probably told half a dozen lies before lunch but always means well and sees what most people call “reality” as a never-ending flux to be selectively edited or embellished.

Since Joachim, the subject of her intense lost affection, is just a voice on the phone or his apartment building’s intercom, it’s hard to say whether he actually contributed to her bereft hysteria or not.  Joachim definitely shot photos of Paula, some of them acclaimed. They once lived together in Mexico and she now has his fluffy white cat that he’d like her to return.

The French title means “young woman” and the English title is that of the large public-transport hub serving the Paris neighborhood Paula wanders with a few possessions, essentially homeless.  Since she’s both irresponsible and resourceful,she bounces from temporary crash pad to cheap hotel to modest but acceptable lodgings. Paula has one blue eye and one brown eye, a trait that leads to one of many intriguing episodes when Paula surfs a case of mistaken identity into a job offer.

Paula accidentally encounters a close relative to devastating effect, shows a novel knack for childcare, inspires sexual overtures from both sexes and generally tries the patience of everyone she meets. She’s quick to apologise even though it’s unclear whether she ever actually understands what she should have done differently. We’re given to understand that her dearest wish is to be reunited with Joachim. Some late-arriving developments take Paula in unexpected directions.

The film is shot and edited so as to give cohesion to the verbal and physical ramblings of a central character who — by choice or necessity — never stays put for long. Present in nearly every frame, Dosch makes Paula’s sometimes implausible trajectory seem utterly true-to-life.  A small parade of supporting characters is etched via good casting and effective dialogue.

No normally constituted person would want to live with Paula, but it’s a memorable experience to share her life for 97 minutes of screen time.

Paris locations, by day and by night, are nicely served.