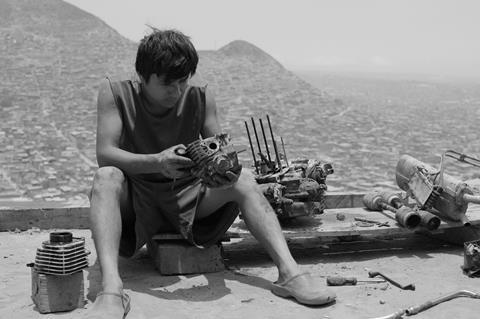 When his spluttering motorcycle taxi finally conks out, Jorge (Jose Luis Nazarios Campos) must find another way to support his wife and baby daughter. He leaves his home on the outskirts of Lima and heads to the gold mines of the Andes. What he finds, in this striking documentary-infused drama, is a frontier town clinging to the cloud-shrouded mountains, a community governed by superstition and savagery in which life is cheap and the devil which lurks in the mines must be appeased. This impressive feature from Matteo Tortone (White Men) blurs the lines between fiction and factual filmmaking to immersive effect; this world of expendable lives, lost souls and ritual sacrifice is vividly brought to life.

A fascinating portrait of an alien place

Mother Lode is an accomplished first solo feature from Tortone, who co-directed White Men with Alessandro Baltera and served as cinematographer on the Berlin 2020 title After The Crossing. The film screens in Tokyo following its premiere in Venice International Film Critics’ Week. Further festival screenings seem likely, and the picture, which has a kinship with the lyrical hybrid approach of films like Michele Pennetta’s Il Mio Corpo or Jorge Thielen Armand’s La Soledad, will be of particular interest to events and distributors which specialise in the more experimental fringes of documentary filmmaking.

The choice to shoot in black and white, so often a hollow stylistic decision, is fully earned by Tortone’s approach. It’s not just monochrome — there’s a striking contrast between the whites, as glaring as sun-bleached bones, and the blacks, which are as engulfing and bottomless as the mines which are carved into the side of the mountains. The camera splits its time between gazing out at the imposing, somewhat intimidating horizons and shadowing Jorge as he makes his way from Lima, through the badlands populated by “thieves and drunks” at the foot of the mountains, to the rough-and-ready gold-mining town of La Rinconada, the highest permanent settlement in the world.

An intermittent narration talks of the deals that the miners make with fate in order to ensure continued fortune: “They say that gold belongs to the devil.” The devil that controls the mines is a “little man with the white beard and pale face of a Gringo.” When the vein of gold narrows, the devil demands a “Pagacho,” a sacrificial offering. And in this town full of rootless fortune-seekers, people disappear just as suddenly as they arrive.

This sense of an uneasy bargain struck with the earth is underscored by the sparse but haunting score, for the most part played on a lonely, reverb-heavy guitar. But even without the hints of darkness delivered by the narration, it’s a fascinating portrait of an alien place. The camera clings to Jorge as he maps out the town, plodding through snaking alleys, muddy thoroughfares, past bars which dole out hooch from clear plastic water carriers to miners who sway, uncertainly, to blaring music with mud still on their boots and fortunes yet to be earned. And all the while, explosions echo around the mountains like a warning. It’s among the hardest places on earth to make a life, but Tortone finds a brutal beauty there nonetheless.