Tali Yankelevich shops for success with her debut feature 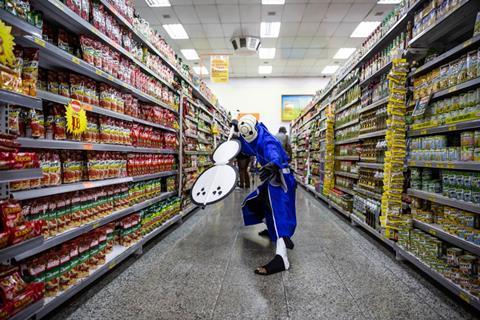 If the idea of a documentary set entirely within the confines of a Brazilian supermarket sounds about as interesting as doing the weekly shop, Tali Yankelevich is here to change your mind. The first-time feature director shows a similar playfulness to the documentary work of Denis Côté as she makes a virtue of the confined spaces of the store, stocking up on stories and philosophy from the people who work there while always keeping an eye out for the artistic and cinematic. My Darling Supermarket’s universal appeal, inventive camerawork and offbeat storytelling should make it attractive to festivals looking for films to balance out heavier themed documentaries after a premiere at IDFA’s competitive debut strand.

As cinematographer Gustavo Almeida’s camera travels the store, we become aware of humans as part of the supermarket machine - a series of moving parts confined to one or two tasks. As a manager puts it near the start, it’s “just ordinary people doing their jobs - why would you want to watch that?”. The reasons why, it turns out, are manyfold as we come to get to know those who work there.

Take Rodrigo, for instance: he may spend a lot of time on the bread counter half-flirting with his colleague Kelly and asking customers if they want anything else, but he also knows a fair amount about the mysteries of quantum physics. Or Ivan, who spends much of his day baking bread rolls, but likes to dress as a Manga character in his off-time and has a strong interest in Japanese culture, -adding a touch of the surreal to the supermarket floor.

Elsewhere, we’ll meet the CCTV operator who talks like a cop as she looks out for thieves but is equally happy to chat about her relationship with her daughter, get a checkout guy’s guide to romancing customers as he rings up their goods, and listen to a cleaner singing as she works. The very repetition of the tasks, it seems, can bring on an almost zen-like state in which to consider the finer points of the universe - if you’re not burning with jealousy over the other girl Rodrigo is talking to, that is.

Yankelevich has a keen interest in the sort of detail others might overlook, whether its the way a machine churns bread dough, the supermarket sign proudly declaring a “Festival of Dreams”, or the artwork of the man who writes the discount signs with a curvy flourish and who is later seen employing his talents much more creatively. We travel the aisles in daylight, but also see the supermarket in a more abstract way, as it is captured, via reflection, at night. The documentarian  taps into the various rhythms of the store, from the metronomic checkout to the fast-paced laying out of bread buns, or by simply letting Almeida’s camera drift through the goods, so that the pace is always changing, adding interest for the viewer.

These rhythms extend to the music of André de Cillo and Alex Buck, which plays a key part in helping to vary and add to the mood of the film. Areas of the store become like parts of the orchestra - piano used in one place, woodwind in another - building gradually to a symphony of sorts, including a waltz at one point. When Yankelvich considers the store at night - complete with ghost stories - it takes on an electronic twist. The “Darling” of the film’s title is informative. Yankelevich loves every inch of this supermarket and her interest, in turn, endears it to us. One thing’s for sure, you’ll look at the guy behind the bakery counter differently next time you do your shopping.