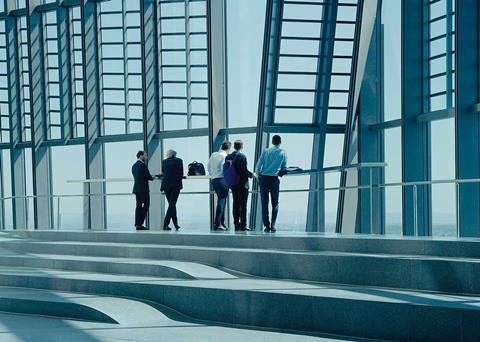 Simple questions elicit complex responses in Oceonomia. Writer/director Carmen Losmann’s desire to understand how the global economy works is the starting point for a methodical, thought-provoking economics lesson. The subject could not be more timely which may pique interest in a dry-sounding documentary that proves to be surprisingly nimble and absorbing.

Claiming to be motivated by simple curiosity, Losmann wants to understand how consistent economic growth has created a widening gulf between the wealthy and the poorest in society. What is the relationship between private wealth and public debt? How does the money supply grow to accommodate demand? What are the rules of the game?

She finds some imaginative ways of undertaking her investigation including an unconventional game of monopoly played on a city street. Mostly, she goes directly to source and interviews high-profile financial figures including Peter Praet, chief economist at the European Central Bank, Nicolas Peter, chief financial officer for the BMW Group, and Andrew Bosomworth, head of portfolio management at PIMCO. At this level it seems to be exclusively a boy’s club.

The process is not as easy as it sounds. Losmann is treated with suspicion and her intentions are constantly challenged. Questions must be submitted in advance. Scheduled interview time is drastically cut. There are evasions and obfuscation, restrictions that require her to use actors to voice conversations and settle for simulations when the real thing is put off limits. The defensiveness starts to transform Losmann into the equivalent of a dogged investigative reporter in a shadowy conspiracy theory thriller. Unfortunately, there is no Deep Throat to conveniently spill all the beans.

Losmann presents her findings as charts and graphs on a computer screen. It could almost be a formal presentation. There is a visual elegance to other elements of the film as we are presented with images of anonymous high rise city buildings sculpted in glass and steel where far-reaching decisions are taken behind closed doors.

The meat of the film lies in her interviews and the way these influential figures tie themselves in knots trying to explain the simplest concepts. How is money generated and how is money generated for profit are tricky concepts that elude them like slippery eels. Few grasp the bigger picture. Silence is followed by an embarrassed clearing of the throat and a playing-for-time gambit of remarking: “ that’s a great question”. Hesitations, confusion and tetchy exasperation provide priceless moments. The general consensus seems to settle around the notion that capitalism and the global economy don’t have to make sense, they just have to work. Which rather begs the question of what happens when they don’t work and how we expect to achieve endless growth from finite resources.

Unlike many of those she interviews, Losmann combines clarity with insight. Questioning topsy turvy concepts and repeating conclusions allows the viewer to understand why constant growth is required to keep the world economy afloat, why debt is considered essential and why the rich become richer whilst the poor are just collateral damage. It may not appear to be a campaigning film but Oceonomia leaves you feeling that something has to change.