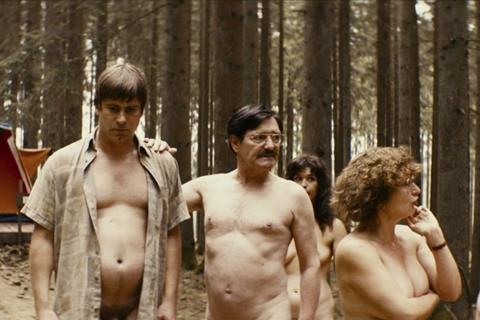 Grief hits us all differently. Even so, the response of socially maladroit Patrick to the sudden death of his father is unconventional. Patrick becomes preoccupied with the fact that his favourite hammer has gone missing. Everything else, including mourning his dead parent, is sidelined by his all-consuming need to find out who took it and why. Which is all very well, but Patrick has a naturist campsite to run. And the nudists are increasingly restive.

The film is a portrait composed of painstakingly observed tiny details

With its glum humour, striking aesthetic, poignant themes and acres of dessicated exposed flesh, the debut feature from Tim Mielants (Peaky Blinders) is destined to stake a claim on numerous sun loungers around the festival circuit. It’s a slow burner which gambles that the incremental build of tension will keep the audience involved, even as the stoically inexpressive central character holds them at arm’s length. It’s a gamble that pays off, although the measured pacing and unwavering focus of the story on taciturn Patrick might limit theatrical potential to the more adventurous end of the arthouse spectrum.

Appropriately for a film about a man who channels the poetry and passion in his soul into making meticulously hand-finished furniture, the film is a portrait composed of painstakingly observed tiny details. Take the colour palette – everything, from the dour bowls of soup which Patrick shares with his parents, to the wallpaper in his house to the light which floods into his workshop is the same weathered beige as the skin of the camp’s clientele. Cinematographer Frank van den Eeden (who also shot last year’s Girl) has a knack of registering unassuming visual elements – like the row of unopened jars of homemade jam, gifts from the cougar nudist who has unilaterally embarked on an affair with Patrick – without overstating their significance.

Then there’s the score, which, before it descends into tribal rhythms and discord, opens with what sounds like a solitary flugelhorn. It’s a well chosen musical motif. If Patrick was a musical instrument, he would probably be a flugelhorn: unwieldy and awkward, given to inelegant blurting interjections, but somehow eye catching nonetheless. The camera, responding to Patrick’s suspicion and paranoia about the hammer-thieving viper in the heart of the naturist camp, creeps around covertly, catching snippets of conversation as the nudists plot among themselves on how best to wrest the administrative responsibilities of the camp from Patrick.

In the title role is Kevin Janssens, who, camouflaged by a bowl haircut and an air of glowering inarticulacy, is unrecognisable from his notable previous role as the sadistic alpha male in Coralie Fargeat’s Revenge. Elsewhere in the cast, Jemaine Clement brings humour to the film as Dustin, a rock star hiding out at the campsite with an on/off girlfriend, and Bouli Lanners cameos as a sweet-natured and overly obliging local policeman.

The hammer-based tension builds until an explosion of naked, caravan trashing violence is not only inevitable, it’s also something of a relief to the audience. After this, a closing chapter which not only reveals the fate of the tool, but also possibly incriminates Patrick in a serious crime, is slightly anticlimactic.