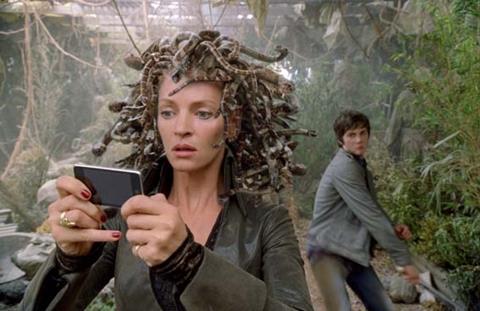 Poor Percy Jackson has a lot to overcome. He has been abandoned by his father, Poseidon, making him a teenage demi-God – and High School is a tough place if you can only read ancient Greek. He has a ridiculously long title, and not many people over the age of 12 have heard of him yet. Can he save the day? Oh yes, indeed, he can.

Uma Thurman channels the Bride to deliver a Medusa the children won’t easily forget when it comes to bedtime.

Christopher Columbus has fun with Fox’s Percy Jackson & The Lightning Thief, a cheesy B-movie family fantasy which is entertaining for children and parents alike – who can resist the siren call of Pierce Brosnan, complete with a shaggy perm, playing a centaur?  Delivering thrills for the young and amusement for the old – the gates to the Underworld lie under the HOLLYWOOD sign, as many might have suspected - it also holds out the hope that some of the family might leave the cinema with a vague knowledge of Greek deities.

This good-humoured action adventure may get off to a slow commercial start as families test the water, but Percy has all the elements of a giant-slaying franchise – there are five books to date. Lighter (and shorter) than recent Harry Potters and more gung-ho than a Narnia, this tongue-in-cheek title should at least be looking at The Mummy or  National Treasure-level returns when it does get off the blocks. Sequels could improve that tally once international appetites are established.

Harking back to his Potter days (he directed the first two), Columbus has trawled Britain a la Clash of the Titans (when Laurence Olivier memorably played Zeus) to cast Sean Bean as king of the Gods, Kevin McKidd as Poseidon, Brosnan as the aforementioned human/horse, and Steve Coogan as Hades, but added a magnificent Uma Thurman as Medusa, Catherine Keener as Percy’s mum and Rosario Dawson as Persephone. They act as ballast to Columbus’s trio of bland if good-looking teenagers – Percy (Logan Lerman), Grover (Brandon T. Jackson) and Annabeth (Alexandra Daddario) as they go on a mythical quest through modern-day USA.

Unlike Potter, Columbus and screenwriter Craig Titley were unafraid to rework Rick Riordan’s 2005 novel, The Lightning Thief: Percy Jackson & the Olympians, simplifying the plot and corralling the running-time into manageable levels for pre-teens. The first-person narrative has been jettisoned, while Percy and his pals are considerably older than 12, to begin with.

Schoolboy Percy discovers his true heritage after Zeus’s lightning rod is stolen by one of the demi-Gods. It transpires that the deities’ frequent visits to Earth have left behind many offspring, who train under the watchful eye of Chiron (Brosnan) at a place called Hogwarts, whoops, Camp Half-Blood. Gorgons, minotaurs, hydras and the Tennessee Acropolis aside, Percy and his new friends have a simple mission: bring Percy’s mother back from the Underworld and restore harmony to the quarrelsome Gods by returning Zeus’ lightning rod.

With Mount Olympus perched precariously on the Empire State Building, Percy Jackson does call to mind the silliness of Ghostbusters: this is family fun, where lotus cakes are handed out in Las Vegas to keep the heroes in a state of perpetual bliss. Percy’s odious stepfather (Joe Pantoliano) is explained away with the line: “His pungent odor masked the smell of your blood!”. For children, this makes sense; for adults, it seems rude to argue.

Pacing is tight and the monsters perhaps too intense for the very young, although this is more exciting than truly terrifying. Sets are good, but nothing approaching Harry Potter levels – this evidently doesn’t carry a Potteresque budget, and Camp Half Blood in particular could do with a few accessories. Special effects work on the creatures is very effective, however, and the Underworld is memorable. Of all the players, Uma Thurman channels the Bride to deliver a Medusa the children won’t easily forget when it comes to bedtime.

Craig Titley, based on the novel by Rick Riordam