Opening Sheffield Doc/Fest, Daisy Asquith looks at a century of gay life in the United Kingdom 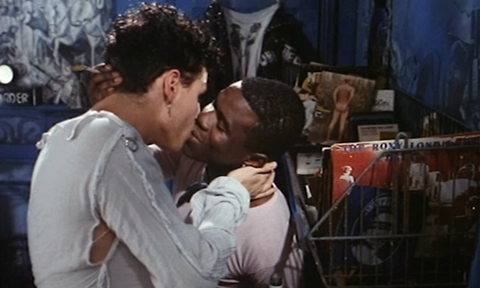 Raiding the archives to piece together a century of gay experiences, Daisy Asquith’s labour of love Queerama is both a heartening celebration of progress and a cautionary reminder of all the broken lives and lonely hearts trampled along the way. This serious-minded cornucopia of gay life is perfectly timed for the commemorations around the 50th anniversary of the Sexual Offences Act that partially decriminalised homosexual acts between two men in England and Wales. Festival screenings and slender theatrical possibilities should follow Queerama’s world premiere as the opening night of Doc/Fest in Sheffield.

QueeramaQueerama offers a bare minimum of context before travelling extensively through the canon of gay films and television productions. There are landmark moments from Victim (1961), The Killing Of Sister George (1968), The Naked Civil Servant (1974), Oranges Are Not The Only Fruit (1989), Young Soul Rebels (1991) and countless others that are used to create an emotional narrative rather than a chronological history of the past century in the United Kingdom.

Excerpts from television documentaries and topical discussion programmes of the 1960s come as a grim reminder of what now seem like the Dark Ages in terms of British attitudes to homosexuality. Virtually any gay individual brave enough to be interviewed is shown in a way that protects their identity. Pity is mingled with disgust as closeted lives are held up for scrutiny with the belief that this is simply not normal. Fear, ignorance and prejudice are the order of the day as homosexuality is very much “the love that dare not speak its name” and well-meaning television journalists ask “once a girl is lesbian can anything be done to change it?”.

There is plenty of opportunities to laugh at the ridiculous, outmoded attitudes of yesteryear but the cumulative impact of the material is often upsetting rather than liberating. A huge amount has changed, but viewers are left to lament the injustices suffered by past generations.

Exploring themes from closeted, lonely lives to punitive laws, sexual desire, queer bashing and an unforgiving society, Asquith utilises an exhausting, sometimes repetitive selection of clips. A wide-ranging mosaic gives due weight to the achievements of Derek Jarman and Terence Davies, the plight of Oscar Wilde and the wise words of Quentin Crisp.

Queerama also feels slightly unbalanced, spending significantly more time recalling the miseries of the past than rejoicing in the advances of recent decades. Gay pride, activism in response to the AIDS pandemic and opposition to Section 28, the campaign for equality in the age of consent, same-sex marriage and much more feel as if they have been shoehorned into a rushed final fifth of the film.

The element that lends unity to the jigsaw-puzzle structure and emotional weight to the entire film is the luscious soundtrack featuring music from Alison Goldfrapp, John Grant, Hercules & Love Affair. The rich, melodic voice of Grant and the jagged, witty lyrics of his songs like ‘I Hate This Town’, ‘Supernatural Defibrilator’ and ‘JC Hates Faggots’ provide the perfect accompaniment to all the images of love, lust, pain, self-loathing and pride and take the film to a different level.