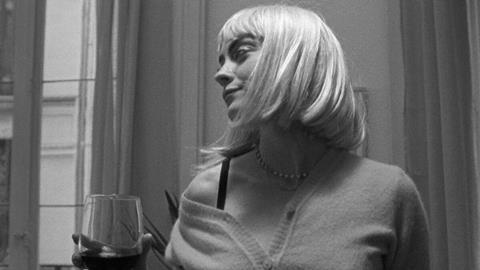 The spirit of the French New Wave lives on in Andrea Bagney’s feature debut Ramona, a Madrid-set, black-and-white take on the identity struggles of a budding female actor that charms and infuriates by turns. Built around an eye-catching performance from Spanish multi-hyphenate Lourdes Hernandez (best-known in Spain as the singer Russian Red), Ramona’s blend of a quirky and engaging heroine with the cinematically nostalgic and the emotionally up-to-date has led to a pickup by Best Friend Forever ahead of its appearance at KV’s new Proxima competition, with further festival appearances likely.

The over-the-credits images signal that this will be a homage to the Spanish capital, as we’re treated to a range of lovingly composed shots of Madrid landmarks (including, for nostalgic football fans, one of the old Atlético de Madrid stadium being demolished). Ramona (Hernandez) — named, we learn, after the Bob Dylan song of which her parents were a fan — is a nanny and translator, living with long-suffering chef Nico (Francesco Carril). Ramona strikes up a bar chat with older Bruno (Bruno Lastra, tall and grey-bearded, like an impersonator of the Spanish king) in a delightfully lively conversation that touches on climate change, anxiety and the evils or otherwise of smoking. Ramona is set up as neurotic, fragile and unfocussed.

They say their goodbyes but, embarrassingly wearing a blond wig, Ramona then shows up at a casting session for a film that Bruno happens to be directing. (Scenes shot through Bruno’s lens are in colour, suggesting that art is more real than life — a spot of postmodern playfulness that Bagney, who always has Ramona express herself more authentically when addressing Bruno’s camera, wants to revive.)

Bruno wants Ramona in the film because he fancies her; she turns him down because she wants to be recognised for her abilities. Although Ramona ends up taking the role, the casting session kicks off a will they/won’t they strand between her and the charming but egotistical and manipulative Bruno (he is a film director, after all) that will lead to much tragi-comic awkwardness and will last pretty much until the end.

The early scenes are the strongest, because they’re the funniest and the most spontaneous. But following her meeting with Bruno, insecurities start to assail Ramona and both the tone of the film and the character start to darken. She worries about her relationship with Nico, about whether she should choose freedom or responsibility, about whether or not she should have children: all standard cinematic millennial concerns that Ramona is recasting for 2022 but which the script doesn’t particularly freshen up.

Hernandez is always an engrossing presence in a role that demands a variety of registers. The shadow of the deaths of Ramona’s parents in a car crash, fleetingly revealed to camera during a casting and not directly addressed until a late, powerful monologue, hangs heavy over things and subtly dictates most of what the perpetually anxious Ramona says and does — including falling for an older man and wishing to be known as ’Ona’ —as she struggles to decide between living a real life and one that’s merely performance. Russian Red fans gets the chance to hear Hernandez deliver a karaoke version of Rocio Jurado’s lung-busting classic of unrequited love Como una ola which, though appropriate, is underwhelming.

Judging from Ramona, Bagney has stylistic affinities with another Spanish director, Jonas Trueba, whose You Have To Come And See It is also playing Karlovy Vary and which also features Francesco Carril. They share a common interest in both the millennial uncertainties of the T-shirt wearing tousle-haired and in cinema as a self-reflexive medium: the film’s credits dutifully list the (recent, Spanish) films whose posters pop up on the characters’ apartment walls. But there’s the sense that in her desire to pay homage to her influences, Bagney has left herself too little creative room to breathe, so that scenes that smack of cliché pile up – the slow-motion dancing in the night club, the rear-view shot of Ramona showering, the symbolically departing train.

Many of the film’s most striking moments are made so by the canny use of pumped-up Beethoven and Tchaikovsky, while Pablo Barce’s editing is snappy and eye-catching. But the real winner in Ramona is Madrid: the care and attention that Bagney and D.P. Pol Orpinoll Freixa lavish on capturing the details of the city they love are redolent of the early Almodovar.