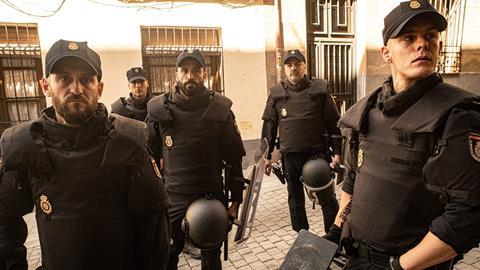 A 6x50-minute TV series named Riot Police might not seem the most palatable proposition right now, following 2020’s searchlight thrown on US police brutality and ensuing protests. On the other hand, one plot strand of this Movistar+ show launched in San Sebastian makes it very timely in the Black Lives Matter era. For the record, the show is not a standard glorification of tough-nut police heroes – a charge that was made against José Padilha’s similarly themed but highly ambivalent Brazilian Elite Squad films – but then neither is it the exposé of policing methods that it promises at the start. Instead, this is an investigative drama with strong ensemble acting that unpicks the contradictions of a set of men who could be poster boys for Iberian toxic masculinity, while focusing on an implacable heroine facing down a monolithic system.

Created by director Rodrigo Sorogoyen (May God Save Us, The Realm) and regular collaborator Isabel Peña, this knotty, involving narrative doesn’t always go where we expect – and goes to a couple of places it arguably needn’t – but pays off as a satisfying, tightly structured six-parter that should create waves on platforms beyond Spain, where it screens on the Movistar+ platform from Oct 16.

Set in Madrid in 2016, Riot Police (Antidisturbios) starts with a six-man Intervention Unit being sent to a crumbling apartment block to supervise an eviction. They encounter a crowd of protestors, and an initially tense face-off erupts when the youngest cop, hot-headed Rubén (Patrick Criado), loses it with one of the crowd. In the ensuing chaos, a young Senegalese immigrant, Yemi, falls from a parapet and is killed. The unit, headed by level-headed senior officer Osorio (Hovik Keuchkerian), undergoes investigation by an Internal Affairs team that includes committed young officer Laia Urquijo (TV regular Vicky Luengo, in a breakthrough lead). She proves brilliant at putting two and two together, first when she locates a seemingly deleted video of the incident, but soon discovers that one of her superiors isn’t happy about the progress she’s making.

While the narrative thrust hangs largely on Laia following a trail of high-up corruption, the character revelations focus on the squad members unravelling in different ways both in their private lives and as a unit, as they try to save their skins, at one point hiring a shady fixer, with predictably noxious results. In the process of her investigations, meanwhile, Laia finds herself making some unlikely alliances, notably Diego (Raúl Arevalo), a unit member who initially seems to be just a hard nut but proves to have a firm moral code.

The drama proves a nicely elastic framework for unpicking aspects of the authoritarian male mindset, with the squad showing its imperfections and weaknesses in different ways; the film excels at masculine confrontations, notably in a terrific extended long-take drinks reunion for the sextet, where hostilities finally erupt. The testosterone is offset by Luengo’s steely performance as Laia, her far-seeing determination evoked by the most intense female gaze this side of Emma Stone. However, the narrative falls into cliché at a couple of moments that seem designed to reassure conservative viewers about Laia’s female vulnerability: one an incongruous (and professionally dubious) sexual encounter with one of her suspects, the other a climactic woman-in-peril routine, both of them jarring with the series’ otherwise taut coherence.

Sorogoyen and co-director Borja Soler (who takes care of episodes 3 and 4) give the film a kinetic and varied texture, with tense dialogue scenes punctuated at key points by some seriously bravura action sequences – notably, a protest by black Madrid residents over Yemi’s death and an extended confrontation with a visiting army of French football fans, which is at the point at which the riot cops win our sympathy – then promptly lose it again through their actions. The fact that the officers’ faces are often hidden by helmets sometimes makes it hard to know who’s doing what – something that the series cleverly uses to keep us guessing about characters and their motivations. While the show goes all out to humanise its central sextet, it by no means offers an apologia for their attitudes, but neither does it serve up a facile condemnation of their worst traits.

Where Riot Police does drop the ball in terms of its scrutiny of authority is to turn too quickly from the squad’s initial actions to a more byzantine investigation of conspiracy among the powers that be – which detracts both from a truly sharp focus on the men on the ground, and from a fully critical examination of systemic abuses of authority. However, the series aims at being a procedural thriller more than a political critique, and on this level it succeeds, offering dynamism, intelligence, complexity and a raft of nicely tuned performances. Anyone who associates Spanish TV crime drama only with the broad-strokes appeal of Money Heist is in for a stimulating surprise.