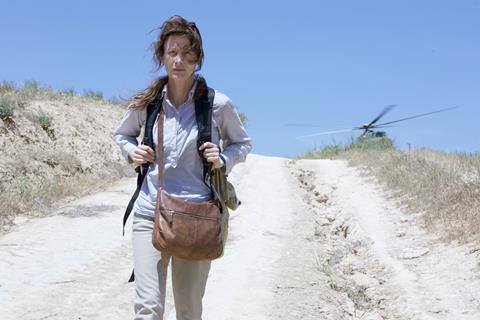 Not so much ‘Torn From Today’s Headlines!’ as thoughtfully and carefully snipped out, Rachid Bouchareb’s Road to Istanbul looks at the issue of young Europeans converting to Islam and taking up the jihadi cause. Closer in style and scale to Bouchareb’s 2009 London River than to his ambitious and energetic modern history epics Days of Glory and Outside the Law, this concise study by the French-Algerian director is a sombre, pensive look at an emotive topic, but its downbeat realist execution makes it feel more a studious case study than a drama that ever catches fire on its own terms.  It is, however, an impressive showcase for Belgian actress Astrid Whettnall, whose almost constant presence gives the film a magnetic centre.

The audience is one step ahead of Elisabeth, however, as we’ve already seen the solemnly smiling young woman making a Facebook video to announce her conversion. The next thing Elisabeth knows, Elodie goes incommunicado but turns up in Cyprus – her ultimate destination, she learns from local police, is Syria via the Turkish border town of Natay. That’s where Elisabeth heads as well, hoping to find her, accompanied by best friend Julie (Patricia Ide) and helped by a reluctant but ultimately simpatico local cop (Abel Jafri).

The film’s subject is a perplexing hot topic that’s sure to inspire any number of European films over the next few years – and Bouchareb has the merit of getting in early, although he doesn’t treat the subject quite as challengingly or as imaginatively as Thomas Bidegain’s recent debut Cowboys, which filtered the topic through Hollywood Western borrowings. Use of an ISIS video shown as an instructional exhibit at a seminar for troubled parents emphasises the overall impression of a drama that sets out to offer food for debate, rather than having more abstract aesthetic aims in mind. The use of grey-blue hues for most of the film – the visual lingua franca of art-cinema earnestness – works to somewhat deadening effect.

On the plus side, Whetnall is a very watchable figure who conveys some genuine considerable emotional nuance, and proves quite magnetic with her weathered features and husky voice, making her something like the Belgian equivalent of Melissa Leo – put it this way, we can well believe her as a tough mom on a mission.