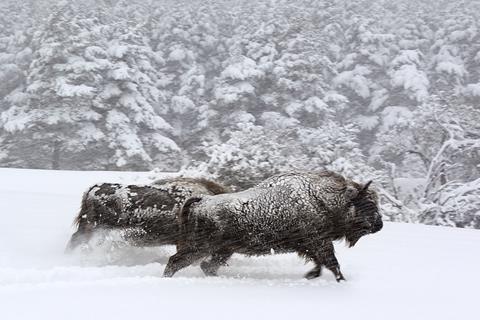 Fourteen years after Winged Migration (Le people migrateur) and six after Oceans, French directors Jacques Perrin and Jacques Cluzaud return to land with their third feature-length nature documentary – to the joy, one presumes, of Pathe and the series’ worldwide distributors, who can finally get around to putting out the box set once Seasons’ theatrical run is done and dusted.

If it has less of the ‘how did they do it?’ fascination of the Winged Migration and Oceans, Seasons makes up for it with rather more story.

With the first two films charting, respectively, winged flight and marine life, Seasons, which premiered at the Tokyo International Film Festival, fills the obvious gap – documenting life on land. One never expects anything less than ravishing nature photography from the duo and their vast crew of specialised camera operators and technical experts, and Seasons steps up admirably on this front, capturing footage of animals at rest, at play, in flight or pursuit, eating, sleeping, giving birth and dealing with catastrophe. Oceans registered almost 3 million admissions in France and another 9 million in the rest of the world, and there’s no reason why the eminently exportable Seasons, which cost a muscular $36.9m (€33.5m) to make, shouldn’t aspire to similar results.

If there’s less of a ‘wow factor’ this time round, that’s in the nature of the terrain: however forbidding the snowy wastes where a herd of bison shelter from a blizzard in the opening scene, however challenging getting the shot must have been, this terrestrial sphere is our own medium. But if it has less of the ‘how did they do it?’ fascination of the first two films, Seasons makes up for it with rather more story.

Given a gentle push by Perrin’s sparsely used poetic voice-over narration but otherwise pointed solely by Bruno Coulais’ old-school orchestral soundtrack, the narrative rewinds to the end of the Ice Age to tell a story of the climate change that led to the natural world as we know it, and to our own emergence as the dominant species (it soon becomes clear that the seasons of the film’s title are epochal as much as annual).

Though we see a few glimpses of human forest dwellers and early farmers in suitably authentic period garb, only towards the end does human activity begin to impact on the animal life we see here, and Perrin’s gravelly lyricism turns darker, warning of the dangers of turning our back on nature: “If we are capable of building eternal cities, we should be able to protect the natural world”, he intones. The rest of the time, the film celebrates what is left of the wild forest canopy that once covered much of Europe; shot mostly in France, Norway, the Netherlands and Scotland, this is a Eurocentric package.

But the directors know their mission is to delight more than admonish, and for much of its running time Seasons consists of deftly edited sequences of deer in the forest, cute owls peering out of tree knotholes, baby bears learning to climb trees, wild horses, elks, lynxes, capercaillies and foxes. While no baby deer are ripped limb from limb before our eyes, the film doesn’t flinch from the fact that the forest can be a predatory place: an owl swoops on a hedgehog, and we see wolves tucking into freshly killed prey behind an artfully placed fallen branch; there’s intra-species violence too, including some crunchingly loud stag fights, bear scraps, and, more unexpectedly, a wild horse stand-off.

But although some of these may prove a bit much for younger viewers, Seasons cleverly wins back the sympathy votes for the predators by showing how wolves are driven out by deforestation and pointing out how for mankind, in much of its recent history, has sorted animals into one of two groups: useful (as pets or beast of burden), and pests.

Is there an element of sleight of hand in the nature footage? Of course – the two directors have never made any secret of the fact that trained and people-friendly animals are planted among their wild brethren, as the long list of animal wranglers in the closing credits makes clear. In a way, though, these go-between animals could be seen as an integral part of the message of what, in the end, is an old-fashioned, beautifully crafted nature documentary for family audiences: they reinforce the idea that man versus nature is an unnecessary dichotomy, as we’re part of what we’re destroying.