Director Sandi Tan sets out to discover what happened to her debut road movie, shot in 1992 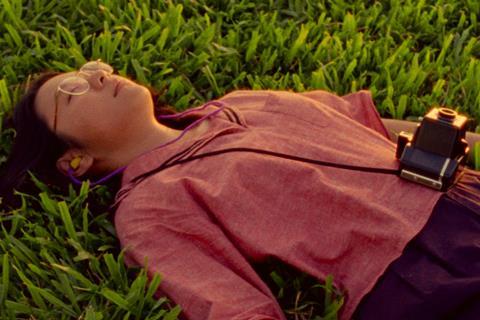 Knowing even a tiny amount about the city-state of Singapore in the early ‘90s helps to appreciate what a curiosity Shirkers is. This “sweaty little island” of tropical heat, verdant jungle foliage and post-Colonial architecture was ruled with a zealously clean fist by Lee Kwan-yew; even chewing gum was banned. Yet, in the middle of this, precocious 16 year-old fanzine editor and video bootlegger Sandi Tan and her best friend Jasmine Ng decided to make a 35mm road movie called Shirkers in a decidedly Lynchian mold. Singapore barely had a feature to its name at that point – this was three years before Yonfan’s racy (for the time) Bugis Street.

The story of what happened to Shirkers – 70 cans of film stolen by an older, Svengali-like American director called Georges Cordona – forms the spine of Tan’s directorial debut, also called Shirkers. But far more interesting are the outsize characters of the three women who got together to make it: determined Tan, outspoken Ng, and their intrepid general go-for Sophia Siddique-Harvey – three inexperienced schoolgirls in a city with no filmmaking community, not to mention the utterly male-dominated world of cinema across Asia at that time. (Clips from the cheesy 1978 Singapore/Philippine co-pro They Call Her Cleopatra Wong feature heavily in this doc, underscoring the general attitude.)

As the story of the mysterious Cordona plays out, the persuasive personalities of the three women both then and now strike a chord which should see this film win heavy festival exposure across Asia. Cordona was clearly a stock-issue shady expat whom the women were too young to recognise for what he was. Yet these girls had such drive and daring; their film was wildly colourful and cheekily erratic and Tan’s decision to play the lead character was a hideous mistake, but still, as they all point out, Cordona’s theft left a hole in their lives where Shirkers should have been. His crime wasn’t in his robbing of the film, but his taking away of their youthful exuberance. “A piece of my spirit died,” says Tan, who has since moved on to write a best-selling novel, giving expression to the intense creativity which brought the film into being in the first place.

When the cans turned up 25 years later Tan, with the help of the Sundance lab, set about driving backwards into her own past, interviewing the players in this drama and resurrecting the timeline. This prompts a resumption of hostilities — the endearingly outspoken Ng calls Tan an “asshole”, and it’s clear she had that capability — but also a re-examination of their friendship. The rediscovered film footage itself is bizarre; the confusing plot centres around Tan as a portly teenage grim reaper-of-sorts roaming around Singapore with a briefcase, a nurse, and an Irish Wolfhound.

Would it have been in a success? In this business where nobody knows anything, the answer to this question will always be elusive as Cordona destroyed the sound. Footage is also clearly dated to a time when Jim Jarmusch was at his peak; you couldn’t hope to release it now.

Tan and Ng were self-confessed “weirdos”. They were also not short of resources (Singapore has always been an affluent place), able to withdraw the final $10,000 from cash machines across the city, before pursuing their studies in the US and England. But they were unusual people who liked unusual things in a place which put the idea of conforming above all else and made an unusual film. Helped by a gently choral score by Ishai Aidar, they finally get their due.