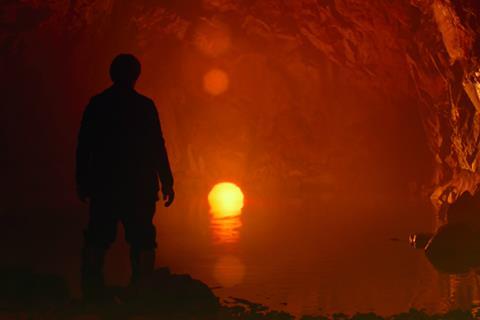 A man who has retreated from civilisation to run a Siberian shack bar at the foot of a glacier ventures forth by dog sled to reconnect with his dreams and memories, and to seek life’s essence, in Abel Ferrara’s addled stream of consciousness experiment. Despite Willem Dafoe bringing gnarled gravitas to a screenplay which pinballs between oblique portent and grotesque shock tactics, this is an incoherent indulgence. The dogs, a team of five up-for-it huskies, seem to be having a blast, so at least that’s something.

Putting aside the question of why the film has been programmed in the Berlinale Competition, Siberia raises another, more fundamental issue. With multiple locations, chosen to represent extremes (the journey takes in snowy mountainous terrain, desert sands, caves and some kind of concrete torture facility, among others) it smacks of the kind of auteur privilege which seems commercially irresponsible and depressingly outdated. Pursuing a cinema of sensation agenda is all very well, but there should be a kernel of honesty and meaning in a film, or it just looks like the insta feed of a well-traveled psychopath. The Ferrara name and the likely extreme response to the picture following its premiere in Berlin might be enough to secure further festival bookings and perhaps even sales to VOD platforms based on oddity value.

Siberia is visually striking, but wildly inconsistent in its aesthetic: some of the picture is meticulously composed and digitally enhanced, some of it appears to have been shot on a gopro. The film opens in a Siberian half light. Serving behind the bar in a hut at the end of the world, the man, Clint (Dafoe), bonds with an ice fisherman despite having no shared language, then couples with a heavily pregnant young Russian woman while her grandmother chunters in the background. The film’s use of female bodies tends towards the exploitative – they are, in most cases, props rather than characters.

Clint’s inner journey involves plunging down a cliff face into a subterranean cavern, where he confronts another version of himself, a load of naked cave freaks begging to be healed, and his long-dead father. From the cave, we are blasted into the solar system to witness a trippy cosmic nebula with a husky’s face superimposed on top.

From there, a Bedouin tent in the desert and an encounter in a forest with a magician (Simon McBurney). “I am interested in the black arts”, Clint says, by way of introduction. “Your reason is an obstacle,” announces the magician, which sounds a lot like Ferrara giving himself license to do whatever he feels like doing, while plundering his central character’s subconscious for images which are arresting, frequently unsettling, but mean very little when strung together.

Ultimately, it’s quite possible that there is an element of trolling involved on Ferrara’s part: how else does one explain the scene in which Willem Dafoe maypole dances to the dentist’s drill strains of Del Shannon’s Runaway?