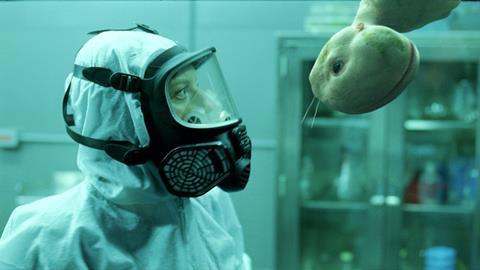 With Splice, Vincenzo Natali has updated the Frankenstein story and placed it at science’s cutting edge, in the field of gene-splicing.  The perils of genetic manipulation are addressed, horror-style, and a hybrid species character redefines conception and copulation. Natali’s experiment works.

Adrien Brody and Sarah Polley in the cast should help Splice go beyond the existing techno-horror audience – the prospect of each in intimate contact with a hybrid species could bring in armies of the curious. English-speaking territories should be strongest for the film, yet stylish effects and deft cinematography will give it international appeal. Home video should also be strong.

Clive (Brody) and Elsa (Polley) are hip scientists probing the frontiers of gene-splicing, battling corporate investors as they take wild risks. The whiz kids’ breakthrough is a human/animal hybrid that grows alarmingly fast into a female humanoid, the sexy and willful Dren (Delphine Chaneac). Created with Elsa’s DNA (an unethical trick by Elsa), Dren also develops a lust for Clive.

With echoes of Canadian compatriot David Cronenberg and exec producer Guillermo Del Toro (and a touch of Eve from the Species series), Natali directs this story of an out-of-control experiment with a sense of the vast new powers in the hands of scientists who toy with genetic pairings. The spliced monsters seem to emerge from the test tube, rather than from the CGI studio, enhancing the eeriness.

Brody and Polley take dramatic risks as lovers who lose the balance between affection and ambition. Delphine Chaneac plays their bald marble-white concoction with a vulnerability and a volatile libido.