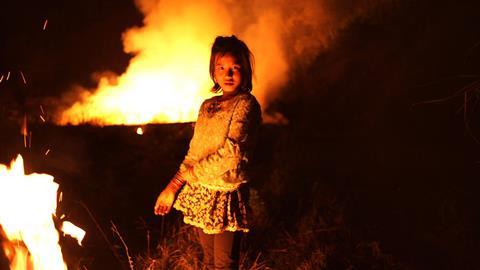 In Ta’ang, Wang Bing follows families from a population fleeing the war which has been smouldering on the border between Burma and China. In this portrait of despair, Wang finds some radiant humanity in an unseen people. Any film by Wang Bing makes a serious demand on its audience. By the standards of this director, who made Crude Oil (2008), a 14-hour documentary on petroleum extraction, Ta’ang is short, not even three hours. It also has moments of stunning beauty as it sits and walks through the mud of war – rather than the fog — with victims of a brutal conflict. The subject matter – the plight of these refugees -  is as current a topic as anything in the news, which could keep it in festivals for a long time. After that, this documentary will be seen more in museums than in art houses.

The Ta’ang, also known as the Palaung, are a displaced people, fleeing from their own war with the Burmese government. We encounter women in flight with their children, dressed in distinctive greyish skirts and jackets, wearing hats held down with silver bands. They don’t carry much more property than those clothes, although some have mobile phones, and there’s an occasional man with a motorcycle.

Cinema can’t get more iconic than this, as the Ta’ang, made itinerant by war, create shelter with whatever they can find, which usually means sticks and stones. Wang watches as a group tries to build a frame for a tarpaulin roof with bamboo poles scavenged from what grows along the road. The poles tumble into a pile before any improvised structure can stand. It’s the myth of Sisyphus, in Southeast Asia.

As the sounds of fighting get closer, the Ta’ang are back on the road again, marching from a camp to destinations inside China’s Yunnan province. Sometimes they harvest sugar cane, but they are essentially the walking poor. Wang’s signature contemplative shots make Fred Wiseman’s seem hurried. His extended observations remind us of a perennial truth about war. For combatants and for the refugees that Wang watches, time is experienced with long periods of inactivity and sudden bursts of urgency that force them to move immediately.

It’s an odd paradox here that Wang’s camera, viewing the Ta’ang at tactile range, is remarkably steadfast, capturing moments of mothers talking, children playing, and conversations halting when artillery fire in the distance gets louder. The longer Wang looks at the Ta’ang, the more human this seemingly undifferentiated stream of refugees becomes. And the closer we get to mud, filthy bowls of rice and open streams, the more universal the images are. In the film’s deliberate pace, and in its dignified fatalism, Robert Bresson comes to mind.

Wang shoots one long section around a campfire, as a Ta’ang refugee, Xiaoman, sits on a hill above an active road, preparing to spend the night. While Ta’ang women talk warily with a Chinese man who enters their camp, the camera shifts between Xiaoman and her two hungry children, who listen and watch for signs of the next surprise. The firelight gives the long scene the shades of intrigue, but the children look as innocent as any victims of conflict. Through Wang’s patient eye, improvised cinema with minimal means in the most remote of locations can have the intimacy of a painting by Georges de la Tour.

Editing by Wang and Adam Kerby gives an improbable narrative pace to the observation of groups of people fated by war to do nothing most of the time. But something is happening as the camera hovers over all sorts of banal activities. The Ta’ang seem to be letting go of their culture – wearing Western dress, planning their next moves on mobile phones, contemplating long absences from home and long treks to safer places.

Like Wang’s other films, Ta’ang is about people enduring circumstances beyond their control. War is the extreme version of that, although we never see the conflict itself. Here Wang gives us collateral damage, family style, one step at a time.