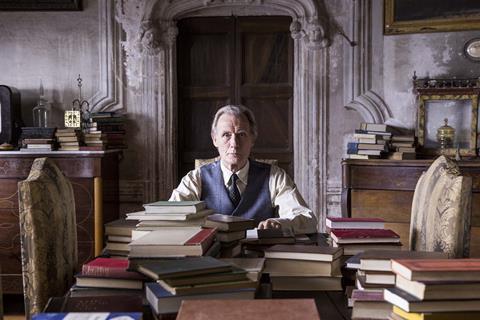 It’s possible to imagine a film having fun with a bookshop setting – contriving a confluence of bookish obsessives, romantics, hobbyists and academics, their myriad stories and relationships crackling to life amid the shelves. Yet surprisingly few have mined the possibilities (Notting Hill had its moments) and Isabel Coixet certainly has nothing upbeat in mind with The Bookshop.

Most credit goes to Mortimer, who exudes grace and quiet strength

By all accounts, Coixet’s source material, Penelope Fitzgerald’s 1978, Booker Prize-nominated novel, is strong. Set in 1959, it tells how the small-minded burghers of a coastal town in the east of England conspire against the town’s only bookshop, whose owner’s cultural presumption includes stocking Nabokov’s Lolita.

Despite its pessimistic ending, Fitzgerald infused her story with satirical wit and colourful characters. For some reason, Coixet’s adaptation throws those elements away, leaving only a moribund drama about the triumph of the small-minded. Despite winning three Goyas and an impressive performance at the Spanish box-office, it’s unlikely that critical response will be uniformly positive outside its director’s home country.

After several “hazy years” of reading and grieving, the widow Florence Green (Emily Mortimer) decides to dust herself off and bring a long-held dream to life. She duly buys the ramshackle Old House in Hardborough, moves in and opens a bookshop on the premises. However, retired general’s wife and self-styled town leader Mrs Gamart (Patricia Clarkson) has set her sights on the Old House as the location for her pet project, an arts centre. Unable to persuade Florence to sell, Gamart starts a campaign of rumours and skulduggery to force her hand.

The shop succeeds, regardless, for a time. Florence employs a bright schoolgirl as an assistant and finds an unlikely ally in the form of the reclusive but exceedingly bookish Mr Brundish (Bill Nighy), the pair bonding over Ray Bradbury and Nabokov. But when Florence takes the risky decision to fill her window display with Lolitas, Gamart starts to turn the screw.

In theory there’s plenty here to engage: a critique of Little England philistinism, the arrival of provocative literature into a sleepy backwater that barely reads, the revolt of a courageous woman against the establishment. Yet none of that comes to life – Lolita’s themes aren’t even discussed – in Coixet’s enervating treatment. Ironically, given the subject, the script is stilted, with actors often stuck on pause and not even the silver-tongued Nighy able to coax more than a laugh or two from his lines.

Even the inestimable Clarkson fails to find much beyond cartoon upper-class villainy; she and Coixet have had better success together, notably in Elegy, nominated for the Golden Bear in 2008. Most credit goes to Mortimer, who reliably exudes grace and quiet strength in adversity.

Screenplay: Isabel Coixet, based on the novel by Penelope Fitzgerald