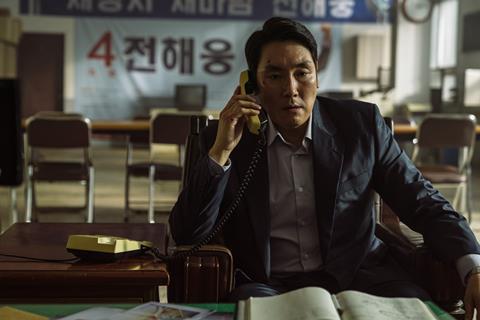 There’s very little difference between the politicians and the gangsters in The Devil’s Deal, an engrossing thriller in which a stolen election leads to revenge and murder. Filmmaker Lee Won-tae relishes the opportunity to tell this story of a pit of vipers, led by Cho Jin-woong as an aspiring congressman who eagerly abandons any trace of moral fibre while vowing to destroy the crooked businessmen and criminals who scuppered his ambitions. Stylish and bracingly chilly, the picture may not have much new to say about how power corrupts, but it’s awfully fun to watch Lee’s scheming combatants grapple to gain the upper hand.

The unabashed wickedness on display is nonetheless weirdly invigorating

Launching at Fantasia, The Devil’s Deal is Lee’s first feature since The Gangster, The Cop, The Devil, which was part of Cannes’ 2019 midnight section. The film’s ace cast includes Lee Sung-min and Kim Moo-yul, and the twisty narrative will appeal to viewers who prefer their thrillers full of double-crosses and backstabbing, as opposed to shoot-outs and car chases. Strong reviews should lead to further festival play.

Lee’s saga takes place in 1992 in Busan, where Hae-woong (Cho) is running for office, assuming he’ll have the Democratic Party’s backing for his nomination, which will all but guarantee his victory. But after influential local business leader Kwon (Lee Sung-min) informs him that the party will be supporting another candidate, Hae-woong campaigns as an independent, inspiring constituents with his idealistic words. Afraid that Hae-woong might win, Kwon uses illegal means to ensure his defeat, which prompts Hae-woong to team up with Pil-do (Kim), a gangster who helped bankroll his campaign, to bring down Kwon.

As the film’s title suggests, The Devil’s Deal has a jaundiced view of politics, viewing Hae-woong as representative of anyone who seeks elected office, gladly compromising his principles in order to obtain power. It’s perhaps not hard to guess where the story will ultimately go, but Lee conveys such steely confidence as he dramatises Hae-woong’s embrace of his dark side — all the while continuing to project a slimy, smiling charm to the outside world. This politician isn’t above playing dirty, first by stealing sensitive information about a lucrative in-the-works land development deal and, later, resorting to brutal violence to get what he wants.

Not that Hae-woong is alone in being rotten: indeed, The Devil’s Deal enjoys blurring the lines between government officials and crime lords, each of them pursuing their own selfish agenda. (Lee has an equally dim view of unscrupulous journalists, who also can be corrupted by money and the proximity to power.) Befitting the picture’s ethically slippery denizens, nocturnal interiors are draped in shadows, while even daytime scenes are a mix of light and gloom, suggesting the moral decay which surrounds Hae-woong. There’s not a single gun in The Devil’s Deal, but the film depicts a pitiless environment in which loyalties can shift in a heartbeat — and characters can “disappear” without warning.

On occasion, the relentless twists can feel a tad mechanical, prompted more by plot necessity than by the participants, but the unabashed wickedness on display is nonetheless weirdly invigorating. This perhaps explains why The Devil’s Deal barely pauses to lament Hae-woong’s loss of his soul in the pursuit of power. In the film’s initial scenes, Cho plays him as a charismatic, virtuous underdog, but we quickly sense the character’s lack of spine. Hae-woong has no compunction about assorting with killers and swindlers, and yet Cho gives this politician a slightly haughty air, as if he believes he’s still morally superior to the gangsters with whom he’s surrounded himself.

That complexity makes him a compelling cautionary tale who’s constantly trying to stay ahead of his debt collectors while furiously mapping out his strategy to ruin Kwon. Lee pushes his pieces around the chessboard with aplomb, leaving the ultimate victor a teasing mystery to the very end — when there’s one last twist in store.