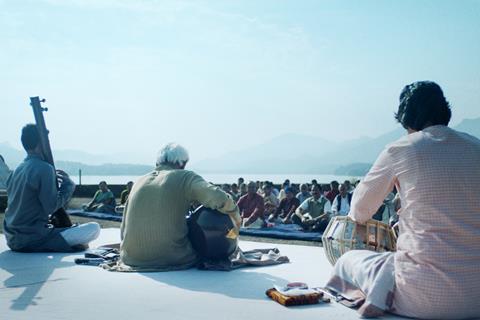 Excellence in Indian classical music, barks a cantankerous, long-dead guru on a reel-to-reel tape, is “an eternal quest”. Almost everyone who pursues it as a vocation will be found to be wanting. Sharad Nerulkar (Aditya Modak) knows all this – his father, after all, was one of the many who tried and failed – but still he drives himself, single-mindedly, in his quest to become a classical vocalist in the Hindustani tradition, a performer worthy of being mentioned in the same breath as his charismatic but increasingly frail Guruji (Dr. Arun Dravid). But Chaitanya Tamhane’s follow-up to Court is not a film about success, it is a study of the quiet downgrading of lofty aspirations and gradual clouding of purity of vision. Mediocrity might not be as sexy and sellable as excellence, but it’s psychologically rich terrain. That said, the film’s fascination with the music is all-consuming, matching that of Sharad, and might prove heavy-going for the uninitiated.

What’s most interesting is the film’s account of the fractious symbiosis of the guru-disciple relationship.

Chaitanya Tamhane returns to Venice, the festival which provided a launch pad for his acclaimed feature debut Court, which won both the Luigi De Laurentiis Award and Venice Horizons Best Picture in 2014. The Disciple is the first Indian film to screen in the Main Competition at Venice since 2001 and Mira Nair’s Golden Lion-winner Monsoon Wedding. The immersive approach to the somewhat ascetic world of Indian classical music, and the sheer volume of performance footage, means that The Disciple is not likely to match the broad appeal of Nair’s film, nor the awards-haul of Court. Still, the picture’s dedication when it comes to fully exploring the mythology, spirituality and indignity of its world should draw a niche audience at further festivals; the presence of Alfonso Cuaron’s name as an Executive Producer will do no harm to the film’s prospects with potential distributors.

There’s an expected narrative for films about artistic careers – the long climb, with lost footholds on the way up. A moment or two of despair. And finally, the pinnacle of achievement. But what happens if, after that uphill slog, it turns out that you’re still only in the foothills, and the distant peaks are an unattainable dream? In Sharad’s case, it takes a painfully long time to come to terms with the fact of his unexceptional abilities. It is clear to the audience, long before it dawns on Sharad, that his musical aspirations are as much to do with avoiding engaging with the mundane realities of the world as they are about the romantic ideal of musical perfection. He recoils from a phone call from his mother, citing preparation for a competition the following week; he snaps at his aunt, his landlady in a modest Mumbai apartment: “I can either pursue music or have a job. I can’t do both.” A decade or so further down the line and Sharad is at least taking his mother’s calls. But he fends off her suggestion that he should marry, warning her that he won’t consider it until he reaches forty.

In a film which is largely linear, but for a couple of glimpses of childhood, there is one jarring flashback. An encounter with a journalist and collector of rare music, the meeting undermines the musical certainties on which the young Sharad has shaped his life. It’s a key scene, but its position in the film, snatching us away from Sharad in his well-upholstered thirties and hurling us briefly back to his student days, serves to distract from its significance to the story.

What’s most interesting, although it gets slightly buried under a few too many almost identical musical performances, is the film’s account of the fractious symbiosis of the guru-disciple relationship. There’s a hunger in Sharad’s expression as he watches his master perform, as if he hopes to absorb his genius by simply hovering in his orbit. But the question he avoids asking himself is does the old man consider him as a successor? Or just an unpaid carer?