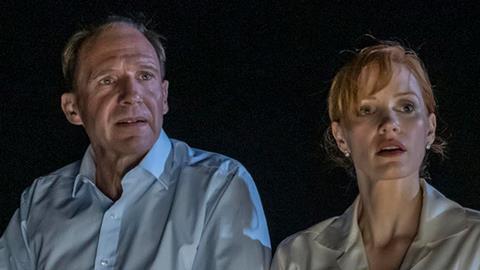 Two worlds collide in The Forgiven, a pointed drama in which wealthy Westerners travel to Morocco for a weekend of revelry, only somewhat cognisant of the poor locals who live there and serve them. Working from Lawrence Osborne’s 2012 novel, writer-director John Michael McDonagh casts a cold eye on this world — in particular, a callous doctor played by Ralph Fiennes who accidentally knocks down and kills a Moroccan boy with his car. The film pulsates with subtle menace as we await a grand reckoning for these cynical hedonists, but the storytelling ends up a little too murky to be the grand commentary on privilege and exploitation McDonagh intends.

For a while, The Forgiven’s dispassionate tone is enticing

A Gala Presentation at the Toronto Film Festival, The Forgiven boasts ample star power, with Fiennes joined by Jessica Chastain, Said Taghmaoui, Caleb Landry Jones, Matt Smith and Christopher Abbott. Tales of spoiled, rich white characters are certainly in fashion — especially on the small screen in acclaimed series such as The White Lotus — and the gorgeous Moroccan locales will only add to the allure.

As the film opens, married couple David (Fiennes) and Jo (Chastain) have traveled from London to attend a party at the posh estate of their friend Richard (Smith), who lives in the High Atlas mountains of Morocco with his boyfriend Dally (Jones). But on the way, David (who has been drinking) is driving too fast and slams into Driss (Omar Ghazaoui) on a deserted road, killing him instantly. Richard insists no trouble will come to David, but the boy’s father Abdellah (Ismael Kanater) demands that David accompany him and the body back to their hometown so Driss can receive a proper burial.

McDonagh (The Guard, Calvary) has moved across genres in his career, but his thematic preoccupation tends to be the close study of how people try to find personal transcendence. Therefore it’s striking how chilly the landscape of The Forgiven is — there’s very little humanity among the film’s rich Westerners, who want nothing more than to enjoy the luxuries awaiting them at Richard’s home. Similarly, David and Jo’s relationship doesn’t seem particularly loving as they exchange dry barbs on their journey — although the death of Driss stirs Jo’s sympathies, whereas David is mostly annoyed at the inconvenience of having to speak with the police.

But when David is taken away by Abdellah and his driver Anouar (Taghmaoui), The Forgiven moves into darker terrain, with Richard and Jo not entirely sure if he’ll come back alive. (There are hints that it’s local custom to avenge a death like this with violent retribution.) From there, the film splits into two story strands: one involving David’s growing rapport with Anouar as he fears for his life, and one at Richard’s home, where Jo begins flirting with a fellow American, a cocky financial planner named Tom (Abbott).

For a while, The Forgiven’s dispassionate tone is enticing, mirroring the cruel disregard that the Davids of the world have for the Drisses. Richard’s estate is cared for by Muslim servants, and their rehearsed friendliness is a mask that hides their antipathy for the people they privately refer to as infidels. The lavishness of the weekend parties — complete with opulent fireworks extravaganzas and dance-floor grinding — is bitterly juxtaposed with the quiet pain Abdellah feels at losing his only son.

Initially, Fiennes is splendid as the insensitive David, a doctor who seems to enjoy very little about his fellow human beings. But as he travels with Abdellah and Anouar to their hometown, his fate very much uncertain, the character slowly grows a conscience. Fiennes certainly has the skill to negotiate that transformation, but The Forgiven doesn’t give him enough to work with, leading his change of heart to feel a little unconvincing.

As for Chastain, she also plays a character who undergoes a personal transformation — in Jo’s case, it’s abandoning the notion of being faithful in order to pursue a fling with Tom. The prickliness of her rapport with Fiennes is nicely counterbalanced with the sexy, spirited chemistry she has with Abbott, who exudes swagger as this pretentious pick-up artist.

But for all of The Forgiven’s evocative mood and tart commentary, McDonagh’s targets end up being fairly obvious, while the revelations that befall David and Jo aren’t that engaging. In his previous pictures, McDonagh has cut deepest when he upends expectations, exploring the surprising depths of his characters. But in The Forgiven, the glitz of Richard’s soirees and the punishing heat of Morocco’s vast deserts don’t have much to offer beyond their surface metaphors — just as his protagonists are fairly simple stand-ins for Western privilege. Some parties just aren’t as memorable as they should be.

Screenplay: John Michael McDonagh, based on the novel by Lawrence Osborne