'The Girl Without Hands': Annecy Review 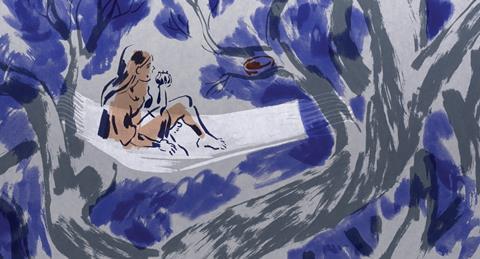 The feature debut from acclaimed short film director Sébastien Laudenbach takes as its inspiration a lesser known fairy tale from the Brothers Grimm. But while the source material may have originally been aimed at younger audiences, Laudenbach’s elegant execution has a sophistication which is more likely to recommend it to older ones. The marketing challenge presented by this dichotomy has not dissuaded buyers – the film has already sold to several territories through Pyramide, including North America (GKids).

The distinctively minimal animation style is the main selling point of a simple fable which deals with the ramifications of greed versus goodness in the family of an impoverished miller. There’s a typically Grimm undercurrent of cruelty and violence to the story which might make it unsuitable for sensitive younger children, however the main barrier to the film connecting with a family audience is parents’ perception of what constitutes children’s cinema. The Girl Without Hands would comfortable occupy the arthouse niche supported by fans of experimental animation. With support from word of mouth and positive reviews, it could connect to the younger audience that responded to Isao Takahata’s The Tale Of The Princess Kaguya.

The story is divided into three loose chapters. The first sees a hungry miller approached by a spirit in the forest which offers him untold riches in return for whatever is behind his house. The miller assumes that the spirit is referring to his apple tree, unaware that his only daughter is, at that moment, sitting in its branches. Thus the deal he brokers includes the child. The miller claims that, having given his word, he can’t renege on the agreement. But the fact that the dry river has started to flow again, with liquid gold rather than water, is the main factor in his decision.

When the devilish spirit comes to claim its prize, it finds that the girl (voiced by Anaïs Demoustier) is protected by her purity. “She is too clean, I want her dirty, like the gold,” says the spirit. The miller takes this literally and curtails his daughter’s access to soap and water, keeping her a prisoner in the apple tree. Even so, the tears she weeps on her hands protect her from the spirit, and it demands that they be cut off. The father complies.

The second chapter follows the girl’s journey after she understandably leaves home. After communing with a river goddess, she meets a handsome prince who takes her as his wife, crafting solid gold prosthetic hands for her to wear. She bears his son while the Prince is away at war, but due to some meddling by the malevolent spirit, she comes to believe that the Prince wants her and the child dead.

The third section of the film follows the girl and her baby son to a hermit’s cave where, with the help of the river goddess and some magic seeds donated by the Prince’s kindly gardener, the small family thrive in isolation, Meanwhile, the heartbroken Prince scours the land for his wife and child.

The animation relies on colour washes and lithe, almost abstract line drawings. Figures are partially represented, sometimes disintegrating entirely. It’s striking how much can be conveyed with such economy: a few deft line depict diving terns, a gently turning water wheel. There’s a wild, unruly quality to the drawing at times of emotional trauma. The sound design and the use of music is not as sparse as the artwork – it fills in the light and shade and shows us what we don’t see.