'The Legend of Barney Thomson': Review 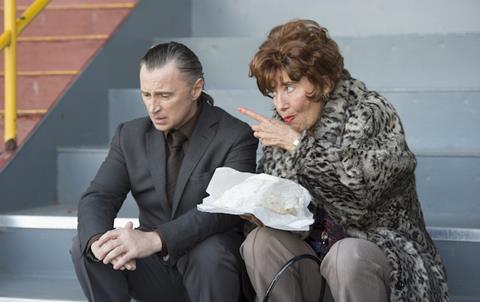 Actor Robert Carlyle enlists the help of national treasure Emma Thompson for his directorial debut The Legend of Barney Thomson which opens the Edinburgh International Film Festival this week, and it is her audacious turn as a mottled Glasgow bingo-loving senior which distinguishes this black comedy, adapted from Douglas Lindsay’s novel The Long Midnight of Barney Thomson.

Clad in a flea-bitten leopardskin fur and an out-of-this-world red wig, Thompson whoops it up as Cemolina, delivering a hard-nailed portrait of goodtime-girl-on-the-skids with a chilling mix of humour and terror

Casting himself as the eponymous, hapless middle-aged barber-turned-serial-killer, Carlyle takes an Elmore Leonard-style scenario and films it with the Coen Brothers and David Lynch to the front of his mind, but struggles to lift his head from under the weight of their influence. Opening Edinburgh will give Barney a publicity boost prior to its UK release through Icon, but it’s interest in Thompson as the foul-mouthed mother-from-hell Cemolina Thomson which may pique audience interest. (Executive produced by Kirk D’Amico and Doug Apatow and financed by Westerkirk Capital, Creative Scotland and Telefilm Canada, this is also set for a Canadian release via Pacific Northwest, with Myriad handling international sales).

The Legend Of Barney Thomson opens with a somewhat listless over-credit narration in which Carlyle, as the barber, gives some context to the upcoming plot. The action starts as Scotland-hating London copper DI Holdall (Ray Winstone) and his sidekick McPherson (Kevin Guthrie) are challenged by the arrival of miscellaneous body parts, posted from across Scotland – a hand, a foot, a severed penis, and, eventually a hairy backside. Holdall soon loses the ‘postal butcher’ case to his aggressive rival DI Robertson (Ashley Jensen).

Cut to Henderson’s barbershop, where Barney, devoid of clientele-pleasing-pizazz (“nae patter, nae sparkle”), has been shifted away from his shopfront position after 20 years of cutting hair. Soon he will be asked to leave the business completely, an incident which leads to the accidental murder of his boss, and, later on, an upstart colleague.

When Thompson (sporting a similar makeover to Tilda Swinton in The Grand Budapest Hotel from the same artist Mark Coulier) shows up and the torrid mother-son dynamic is given play, Barney scoots along Glasgow’s bingo parlours with a dynamic edginess; Jensen, as the copper who literally squares up to her rival Ray Winstone, is similarly energetic. Elsewhere, like its inert anti-hero, the film struggles to find its niche, aiming for a hard-boiled feel that’s more Rango than Fargo, looking for wry smiles through a deadpan irony which is difficult to pull off when the central character (described as a ‘haunted tree’) is such a weight on proceedings.

Interiors are shabby-chic stylish, particularly Henderson’s central barbershop where Barney works, as well as his mother’s dated Glasgow flat, while exteriors are shot in Glasgow’s East End, notably a  Red Road rubbish tip in which Cemolina bounces on a spacehopper, before migrating to the Highlands.

A jaunty score, which ranges from the Pulp Fiction-like use of classics such as Blue Bayou mixed with a zithery, C&W-infused beat, documents Barney in After Hours mode as he haplessly tries to get rid of the evidence before turning to his scary, boozy mother for assistance. (Whimsical scenes involving Charlie (Brian Pettifer), a local idiot-savant, don’t really translate from the page). Clad in a flea-bitten leopardskin fur and an out-of-this-world red wig, Thompson whoops it up as Cemolina, delivering a hard-nailed portrait of goodtime-girl-on-the-skids with a chilling mix of humour and terror. The trouble is, all else pales beside her.

Screenplay: Richard Cowan and Colin McLaren, from The Long Midnight Of Barney Thomson by Douglas Lindsay