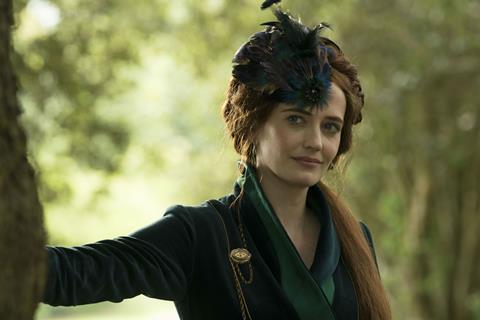 The 2012 novel The Luminaries, set on New Zealand’s South Coast during the gold rush of 1865, won the Booker Prize for its author Eleanor Catton, and she has boldly attacked her own work for this lavishly-realised BBC-backed 6x60 series from Working Title TV and Southern Light. Catton has cut away at a plot which was already assembled like a jigsaw puzzle and worked on splicing it back together with series director/EP Claire McCarthy (2018’s Ophelia). As a visual package, it sits well with The Piano and The Lord Of the Rings as the top three reasons to visit New Zealand the minute this global pandemic is over. The Luminaries is sheer optical escapism, clad in period settings which, like the gold which drifts from the pink dress worn by its heroine (Eve Hewson) in the arresting opening episode, dazzle and seduce. Once the dust has settled, however, Catton’s story can be harder to fall in love with than its alluring setting.

Anna is a huge part for Eve Hewson and she stakes a claim for stardom here, determined to show her range at every opportunity

The plot is a murder mystery, essentially, with added astrological elements. A travelling politico; a dead prospector in a hut; an unconscious woman leaking gold from a ragged ballgown; and a Maori native who has been shot through his green pounamu stone. Or, as one character puts it, “the middle of nowhere, the middle of the night – a savage, a politician and a whore.” Catton and McCarthy will unpick that central mystery over the next six hours but it’s how the director shows it that impresses. The narrative steps – a twisted timeline, the identification of the victim, the separation of the central lovers, the feint of supernatural elements  – are less compelling than McCarthy’s delivery of the Wild West of New Zealand of 150-odd years ago. Craft, as we have come to expect from that country, is a standout, from the recreation of the gold town of Hokitika on the West Coast of New Zealand’s South Island, to the costumes, to the shocking natural beauty captured by DoP Denson Baker.

The series roams backwards and forwards over a nine-month timeline, with events spiralling quickly from a first meeting between Anna Wetherell (Hewson) and Emery Staines (Yesterday’s Himesh Patel) on board their ship the morning they dock in Dunedin after a lengthy voyage from London. A spirited solo traveller in search of her fortune in the new world when we first meet her, The Luminaries’ leading light Anna will move – at a clip - into prostitution, drug addiction, to becoming a murder suspect, a prisoner, and an apprentice to local madam and astrological enthusiast Lydia Wells (who is always imperious and vampy and conniving and always Eva Green).

Hewson, the daughter of rock star Bono, has struggled to find her niche after a showcase part in Paolo Sorrentino’s 2012 film This Must Be The Place opposite Sean Penn (she played a supporting role in Steven Soderbergh’s Cinemax show The Knick). Using her native Irish accent, she is insidiously persuasive as the illiterate Anna: poor but determined; much-sinned-against yet occasionally a sinner herself. Catton and McCarthy have cut away the trappings to turn this entire series into a tango between the two women, the betrayed Anna and her scheming nemesis Mrs Wells. There’s a sense that might have paid off better had more attention been paid to the male characters, but Himesh Patel, playing Anna’s “astral twin” Staines, is not a strong presence either onscreen or when his character is off (which is often). And Lydia’s two foils, drunken husband Crosbie Wells (Ewen Leslie) and thuggish lover Francis Carver (Marton Csokas), also suffer from being under-written. There’s a secondary strand involving opium addiction and the town’s Chinese community which packs out an already-too-busy plot.

Anna is a huge part for Hewson and she stakes a claim for stardom here, determined to show her range at every opportunity - which makes the lack of nuance demanded from Green all the more disappointing. Clad in Penny Dreadful costumes, the actress plays an opportunistic saloon owner given to throwing parties where she dresses up as Aphrodite and spouts endless astrological aphorisms. The bar is called “The Home of Many Wishes” and has been set-dressed to period perfection. In reality though, Lydia is just a pantomime villain dragging on her cheroots while clad in a series of lavish wigs. “God, she talks a lot of shite,” says her husband. He’s not wrong.

The Luminaries will air shortly on BBC2 in the UK.

Written by Eleanor Catton, adapted from her novel

Thanks so much Nadia and to MBI for being so understanding. It has been a dreadful month but at least it is nearing a conclusion, not what we would have wanted, but we are nearly there. I wish I could say the same for the country and the business but let’s all hope for better days soon. And again, thank you, I really appreciate you concern and understanding