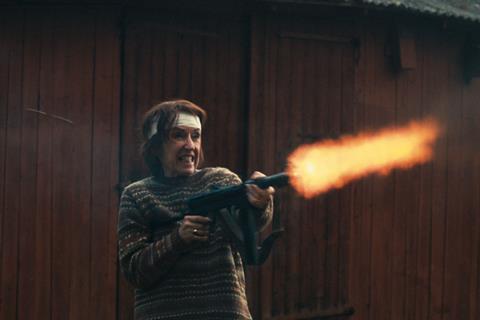 This bracingly grotesque character study, which explores the Swedish housing crisis from the point of view of the new owner of a run-down tower block, would be unsettling at the best of times. But viewing it in the shadow of London’s Grenfell Tower tragedy makes it markedly harder to laugh at dark humour which is already uncomfortably close to the knuckle. A tour-de-force performance from Léonore Ekstrand, as Nojet, the 68-year-old party girl who inherits the block from her father, is compellingly monstrous. And the filmmakers, Axel Petersén and Måns Månsson, display technical flair. However the film tips the audience off balance by failing to provide any sympathetic characters; by the relish with which it spills over into violence; and by the hint of grudging admiration it shows for its reprehensible hellion pensioner protagonist.

Too angular and abrasive to slot comfortably into an arthouse theatrical release outside of its domestic territory, this seems likely to work best as a talking point film on the festival circuit. Tonally, it has elements of Ulrich Seidl at his cruellest and least forgiving, combined with a lurid B movie bombast. As such, it poses a marketing conundrum – this is not a film which is easily pinned down into neat categories.

Of the cast, Ekstrand is the only professional. The rest are non-actors, many of whom actually work in the shadier fringes of Stockholm’s real estate business. Most notable is Christer Levin, in real life an infamous black market broker, who plays the cadaverous family lawyer Lex. In a bizarre, semi surreal detail, Lex also moonlights as a music producer and is currently working on what appears to be the worst stage musical in history. He collects automatic weapons and brandishes a machete if he feels he isn’t getting due attention.

Nojet returns to Sweden, after a lifetime of self-absorption in Spain, to claim her inheritance. But the cash cow she expected turns out to be run down and disastrously managed by her half-brother and his alcoholic son. Untroubled by the legal rights of the tenants, Nojet barges into apartments and interrogates the inhabitants, most of whom are subletting illegally and many of whom are ‘Immies’ – a dismissive term for immigrants. There’s a potential buyer sniffing around the property, who, in one eye-opening scene, gets to explore the owner as well as the building. Both Nojet’s relatives and many of the tenants are opposed to the sale, with her nephew expressing his reservations with a bottle and a fist.

The handheld camera, operated by co-director Månsson, seems to actively seek out the most unflattering angles for each character. Nobody in this film has a good side. Aggressive as it is as an aesthetic decision however, the brutal photography serves to highlight the monstrous qualities of the people who lurk within the film.The sound design is particularly notable. Dialogue is constantly assaulted by the sounds of helicopters, tannoy announcements and crackle of perpetual low level discord. It works seamlessly with a malevolent electronic score which at times sounds like it was written by a psychopath with a collection of power tools.