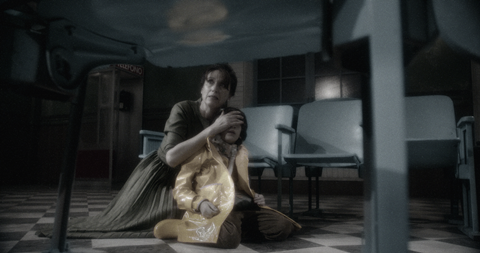 Rod Serling’s TV show The Twilight Zone (1959-65) has cast a long shadow on the cinema of science fiction and fantasy, including several revivals and a 1983 feature spin-off. The format of fantastical premises, expressionist visuals, social content, grounded human drama and a twist ending remains a touchstone for much low-budget, mind-expanding genre cinema. In The Similars, Mexican writer-director Isaac Ezban explicitly homages Serling with an arch narrator, a bombastic orchestral score (from Edy Lan) in the manner of Zone composer Bernard Herrmann and near-monochrome visuals with occasional colour tints for emphasis (from cinematographer Isi Sarfati).

Funny, suspenseful, inventive and charming, this knows when to tone down the homage and become genuinely frightening

The ultimate explanation for the mystery phenomenon riffs on one of The Twilight Zone’s best-remembered episodes, though it would be a spoiler to reveal which one. With proper handling, The Similars could be a long-term cult favourite with subtitle-tolerant science fiction fans

On a night in October, 1968, heavy rain falls all around the world, exciting much comment. Hirsute, bearded Ulises (Gustavo Sanchez Parra) staggers into a cavernous bus station on the road to Mexico City, desperate to continue his journey because his wife is having twins. The clerk, Martin (Fernando Becerril), is weeks away from retirement and decidedly unhelpful. Also turning up at the station are pregnant Irene (Cassandra Ciangherotti), radical student Alvaro (Humberto Busto), an indigenous woman who seems to speak no Spanish (Catalina Salas) and mother Roberta (Maria Elena Olivares) coping with a sick son Ignacio (Santiago Torres). All suffer a strange metamorphosis; their faces change, and they all become doppelgangers of Ulises - who naturally becomes the focus of paranoid speculation.

Many Zone-inspired films stumble because premises strong enough for a 25-minute TV show feel protracted at feature-length, but Ezban delivers a satisfying drama thanks to several extra twists. He gets a clutch of perfect, near-hysterical performances (Torres particularly evokes the Zone spirit as a creepily smiling kid), with each character undergoing their own changes and constant shifts of power (usually depending on who has the gun) among the cross-section of random folks trapped by the storm.

The period setting also evokes a particular edginess, with characters as worried about a big student demonstration that’s likely to get out of hand as the unnatural rain which drives down accompanied by a bombastic orchestral score from Edy Lan. The transformation of most of the cast into doubles for Parra’s shambling Ulise is comic yet disturbing, and accomplished with a seamless use of doubling, make-up, performance and visual effects. An indulgent early sequence panning across a wall of ’60s icons - the Beatles, Sean Connery as Bond, centrefold pin-ups - sets up a coup as we revisit the room to find all the iconic faces replaced by Ulises.

The ending, which does finally get out of the bus station and the rain, takes things a little further, delivering something in the spirit of Philip K. Dick or the more psychedelic Marvel Comics (a pastiche science fiction comic book is a key prop). Funny, suspenseful, inventive and charming, this knows when to tone down the homage and become genuinely frightening - while working in the sort of social comment footnotes Serling sprinkled throughout his show.