Internet arrives in a far-fung corner of the Tundra, bringing with it an intense longing for another life 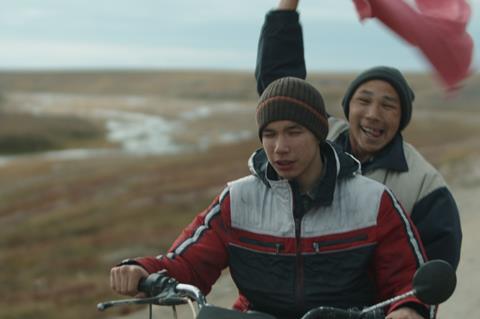 There’s an almost fable-like simplicity to this atmospheric coming of age story. Only 86 kilometers separate Lyoshka (Vladimir Onokhov) – a teenager in an Inuit whale-hunting community in Chukotka in north-eastern Russia – from Alaska and the dream of a new life in the USA. It’s a world away, but at the same time tantalisingly within grasp. And for Lyoshka, there is a similar promise in his one-sided interactions with a webcam girl, HollySweet999. She pouts and vamps for an invisible audience of men panting over their laptops around the globe. But Lyoshka, naïve about the workings of the internet, believes that the moments he spends with her represent a special, shared connection. What The Whaler Boy lacks in story complexity and character depth, it more than makes up in its bone-deep immersion in Lyoshka’s world.

The film’s unfamiliar backdrop is captured vividly and intimately

The assured first feature from Philipp Yuryev, whose short film The Song of the Mechanical Fish played at Sundance 2013, The Whaler Boy has won prizes at Venice Days, Sochi and Pinyao Film Festivals before going on to open Thessaloniki in Greece. The combination of Yuryev’s skill as a storyteller with the film’s unfamiliar backdrop, captured vividly and intimately, should ensure further interest on the festival circuit and from arthouse-inclined streaming platforms.

A deft opening sequence emphasises both the distance and the immediacy between Lyoshka and the girl of his dreams. The camera follows her into what appears to be a warehouse production line of webcam broadcasts. We lock eyes with her, as she preens for the lens. Then, in a neat shift, the camera pulls back to reveal an audience of stony-faced men,dressed in the kind of industrial outdoor gear needed to face the arctic blast of the Bering Strait. One by one, the impassive faces lit by the glow of a single laptop screen peel away until just two are left: Lyoshka and his best friend Kolyan (Vladimir Lyubimtsev). “Can she see us?”, wonders Lyoshka, a question that he never fully gets to grips with.

The impact of the blonde cam-girl on Lyoshka is considerable. In this blighted corner of the tundra, there are few women. The men of the village subsist on whale blubber which is hauled, door to door, in a bucket. The newly-arrived internet provides an escape, but only as long as the electricity holds out. When the power cuts, yet again, a montage set to a rippling score shows the candlelit evening rituals of cards, fish-gutting and family meals. Boys of Lyoshka’s age spend their free time kicking the whale entrails that float in the surf and trading mythic stories about the ones who got away, who made it to Alaska and the American dream.

The more that Lyoshka clumsily woos his cam-girl, talking to the glassily unresponsive screen in his mangled, self-taught English, the more protective of her he becomes. Convinced that Kolyan is a rival for her affections, his jealousy erupts into violence.

What follows is an abortive odyssey, a voyage which, while it might not quite lead to self-discovery, certainly makes a few stops in the right direction. Ultimately, like his grandfather, who cheerfully and incorrectly predicts his own death on a near daily basis, Lyoshka is more comfortable in this world than in any other.