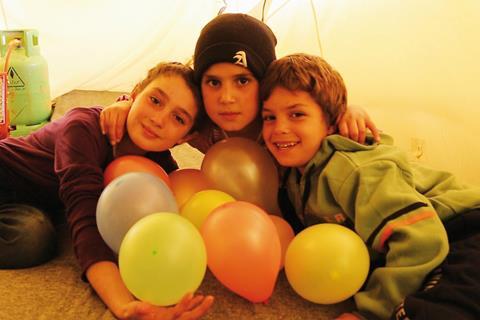 The life of a young Syrian refugee is marked by privations and uncertainty but tempered by an abiding sense of hope in the future. Dina Naser’s closely observed documentary Tiny Souls doesn’t shy away from harsh reality, but is distinguished by the way it draws out the signs of optimism and normality that endure against all the odds. It should readily secure further festival exposure following its world premiere at CPH: Dox, and find a welcome in cable and satellite channels.

Jordanian based filmmaker Naser began capturing the story of nine-year-old Marwa and her family in 2012, and her feature-length debut grew out of an initial nine-minute short. When she met the family, they had fled Syria and found shelter at the Zaatari refugee camp in northern Jordan. They assumed their time there would be measured in weeks or perhaps months, never realising that it might stretch to years.

Naser keeps the focus very much on Marwa, her younger sister Ayah and their little brother Mahmoud. Close-ups capture the expressive faces of children filled with unguarded curiosity and excitement as they share their stories. They casually talk of having experienced “unimaginable horrors”, the deaths they have witnessed and the moment their house in Syria was burnt to the ground. They describe the refugee camp as “paradise”. What we see is a large family squeezed into a cramped tent that leaks when there is rain. Shelter is modest, water has to be collected and carried across muddy terrain from a central source, Mahmoud washes in a tin tub.

Despite any hardships, the children cannot help being children. The camp is almost a playground to them, full of possibilities and mysteries. They are cheerful and uncomplaining, with Mahmoud turning into a bit of a performer over the course of the film. He develops a fondness for wearing hats. “They look good on you, “ says Naser. “I know,” he replies.

Naser’s need to renew her official permission to visit the camp creates some breaks in filming, and she provides the three siblings with their own camera to document their daily existence. Over the months, it is the simple joys that matter, from a Skype call with older brother Suleiman and a first glimpse of his son to the bold family decision to try and find a life outside of the camp.

In an echo of Richard Linklater’s Boyhood, the four years of filming creates a potent sense of lives changing and the resilience required to keep cheerful and carry on. Marwa grows into a young woman before our eyes. She starts to notice boys and is no longer allowed to be out alone in the camp. Ayah seems to become more belligerent as the years pass, while Mahmoud is eternally mischievous and set on adventure.

Immersing herself in the lives of Marwa and her family creates a personal connection for Naser that the viewer comes to share. She is able to carefully construct a film and a narrative that shows the human face of the refugee experience. Their setbacks, small triumphs and lack of basic amenities that many western viewers take for granted (running water, affordable food etc) are all deeply felt. The ability to walk in their shoes makes the ultimate fate of Marwa and her siblings all the more poignant.