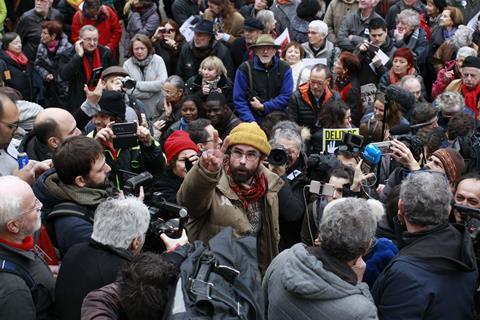 To The Four Winds

What the state deems a political issue, individual citizens regard as a humanitarian call to arms in To The Four Winds (Libre). Michel Toesca’s thoughtful, involving, grass roots documentary brings a fresh eye to the plight of migrants seeking asylum in Europe as it charts the conflict between an implacable force and an immovable object of public activism. The result should attract both the politically engaged and admirers of documentaries in the tradition of Nicolas Philibert and Raymond Depardon.

To The Four Winds is set in the Roya Valley, located between France and Italy. A long, floating shot soaks in the natural beauty and tranquility of an area that, we soon discover, has become a battleground. Each month, thousands of migrants try to cross the border in search of a better life in France. The authorities do everything they can to prevent them making a claim for asylum, transporting them as far away as possible to slow down their inevitable return.

Farmer Cédric Herrou ( a bespectacled, Guy Pearce lookalike) has started to provide shelter and sustenance to the migrants, welcoming them to his own home. He makes the entirely reasonable argument that if his small farm with its 4 hens and 100 olive trees can comfortably support eight migrants, then surely a rich, powerful country like France can provide a new home to say a million.

As Herrou provides accommodation for more and more migrants, he also becomes their most devoted advocate against a Prefecture that will do anything to remove them — even if it means bending their own rules or breaking the law.

Herrou is a calm, reasonable man who never seems to raise his voice or lose his temper. Instead, he stubbornly pursues what he believes to be right, even if that means he winds up in jail. To The Four Winds follows the situation over three tense years and seems to have adopted something of Herrou’s manner in its approach. It calmly presents the facts, observing well-mannered tussles with authority, recording the stories of migrants from Chad, Libya and Nigeria, and allowing the viewer to draw their own conclusions.

Herrou gradually emerges as a heroic figure and what begins as an intelligent, absorbing chronicle of his struggle assumes a more emotional grip as the machinations of the French state are revealed in all their outrageous absurdity. The simple story of Herrou, and fellow members of the farming community, extending the hand of friendship to foreigners assumes a wider significance as it exposes strains of racism and intolerance that run throughout the land.

Director Michel Toesca remains an unobtrusive presence throughout, occasionally heard off camera or asked to make a contribution by Herrou. He remains as tenacious as Herrou following events, remaining in the thick of the action and capturing high drama as well as moments of warm humanity.