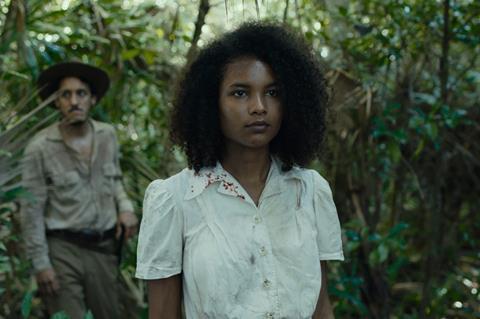 Those who fail to understand the mysteries of the jungle are destined to suffer the consequences in Yulene Olaizola’s cautionary tale. Tragic Jungle takes the elements of a typical adventure yarn and moulds them into a warning on the costs of exploiting nature and the evil that men do. Brooding atmosphere easily trumps the unsurprising narrative in a film that should still attract some attention on the festival circuit.

Set in 1920, Tragic Jungle unfolds on the border between Mexico and what was then British Honduras but is now Belize. There is little to suggest the period beyond some of the full-length, button-down dresses worn by the women. Initially, the film appears to be a cliched tale of exotic adventure complete with damsel in distress and colonialist bounder in hot pursuit.

Having spurned the advances of an Englishman, Belizean woman Agnes (Indira Rubie Andrewin), her sister Florence (Shantai Obispo) and their guide Norm (Cornelius McLaren) make their escape through the jungle. When the Englishman takes his revenge, Agnes is left for dead. She survives and is rescued by a group of Mexican workers employed to tap chicle from the sapote trees. Agnes is an object of curiosity and desire for the men, who react as if Snow White has strayed into their lives, but the workers are unaware that they may have welcomed a Mayan demon into their midst. Xtabay is “the woman you desire in all women” and is said to lure men to their deaths. No matter what path the workers take, their encounter with Agnes has sealed their fate.

After a conventional start, Tragic Jungle strays into Werner Herzog territory (shades of Aguirre, The Wrath Of God or Fitzcarraldo) with a generous side helping of The Treasure Of The Sierra Madre as the hapless workers fall victim to greed, lust and paranoia.

Cinematographer Sofia Oggioni captures the changing moods of a dark jungle fraught with dangers. The Rio Hondo River glides from a sickly slate grey in the misty morning dawn to clear green in the bright light of day. The sound mix emphasises the cries of birds and the stealthy prowl of animals happy to feast on any human that should fall in their path. Olaizola’s background in documentaries is very much to the fore in her depiction of the indigenous workers hacking into bark, releasing the sap, cooking it to produce gum or climbing to the skies with only a slim rope and the flexibility of their feet to maintain a grip. Worker and land seem equally expendable in the drive to exploit the area’s resources.

The atmosphere, texture and tension of the piece are all effective. Less convincing is the possibility of Agnes as a demon in their midst. The men are bewitched by her. Extensive voiceover warns us of what to fear (“don’t let her sweet nectar intoxicate you”). But if Agnes is Xtabay, then she seems a rather bland demon. An encouraging glance, a shy smile or a beckoning open arm are all it takes to welcome victims into her deadly embrace. A scene in which a worker watches Agnes walking with one human leg and one giant chicken leg hints at unsettling ways in which the film could have taken a more imaginative approach.