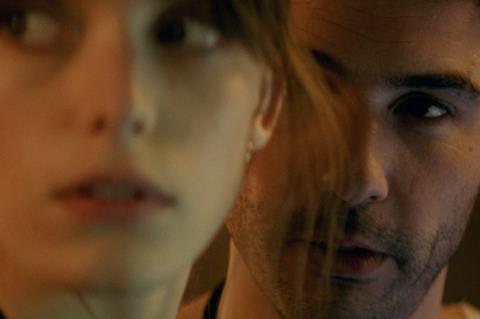 Like the fleeting highs and crushing lows experienced by gambling addicts, Treat Me Like Fire (Joueurs) starts off with energy and confidence, only to slowly succumb to cliché and implausibility once the initial adrenaline rush subsides. Tahar Rahim and Stacy Martin have electric chemistry as the compulsive, carnal lovers who are as hooked on each others’ bodies as they are on placing their next high-stakes bet, but director Marie Monge’s stylish, gritty feature debut can’t quite sell us on the characters’ reckless leap into oblivion.

Screening in Directors’ Fortnight, Fire offers promising commercial prospects thanks to its star power and accessible plotline. Opening in France on July 4, this may be familiar narrative territory, but the alluring world of illicit underground gambling could hustle up considerable interest.

Martin plays Ella, a young Parisian waitress who hires the flirty Abel (Rahim) to work in her father’s restaurant on a trial basis. They hit it off after one day, but he quickly steals all the money from the register, forcing her to chase him to his final destination — a top-secret gambling club — where he uses the funds to win big. Ella is furious at his thievery, but this seductive scoundrel gets her hooked on the thrill of betting, and soon they’re sharing a bed and a seat at the tables.

Fire follows a predictable story arc, mapping how the ecstasy the couple shares in the early days of their steamy relationship eventually gives way to darker emotions once their luck starts to falter. It’s no surprise that Abel’s killer smile belies dangerous secrets, but Monge daringly depicts Ella as a seemingly sensible woman who, despite her better judgment, becomes obsessed with the man and his milieu.

This narrative gamble is helped by an urgent performance from Martin, who transforms Ella into a desperate, strung-out woman who abandons her respectable life for nights spent haunting all-hours clubs and grimy underground spots so that she can feed on the addiction that’s made her feel alive. The segue from demure waitress to gambling junkie happens too abruptly, however, and Ella’s willingness to go along with Abel’s toxic lifestyle ultimately fails to convince, although Martin’s commitment to Ella’s fixation at least somewhat mitigates the logical stretch.

Rahim has an easier time as a roguishly handsome cretin who happily drags this woman down into his personal hell. Abel gets progressively uglier and more pathetic, but the actor brings enough smouldering vulnerability that, even if it’s partly a ploy to keep Ella around, we can almost understand why she would stay.

Alas, Fire drifts deeper into movie-land absurdity in its later reels, leaning hard into its thriller aesthetic without always justifying it on a narrative level. Monge shows real skill with Fire’s flashier elements — her sex scenes, car chases and gambling montages are suitably slick. But it becomes increasingly difficult to sympathise with these lovers, whose mutually assured spiritual descent stops feeling like a product of their addiction and more like a stylish pose meant to convey tormented depths that aren’t in the cards.