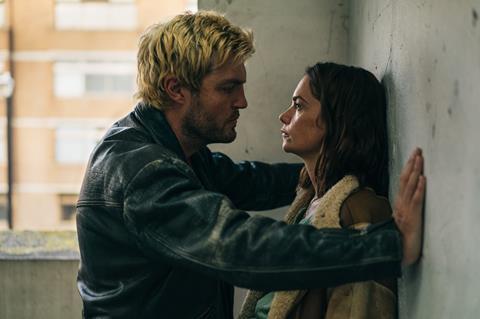 The UK’s Harry Wootliff expands her range to a dazzling degree with her immersive second feature True Things (following on from the admired, if less formally-daring, Only You). This intoxicating tale of a woman and the wrong man in a rundown seaside town is adventurously delivered. The presence of Tom Burke as romantic lead isn’t the only thread that ties True Things to the recent work of Joanna Hogg: this is a strong, assertive, sexy story about and by women that every woman will in some way recognise, and many more men besides.

A vindication of the ability of Britain’s tenacious independent sector to continuously innovate and challenge.

Already picked up for distribution in the UK by Picturehouse Entertainment, True Things bows in Venice’s Horizons sidebar section, although it could easily have competed. A pedigreed production (Tristan Goligher’s Bureau and Jude Law’s Riff Raff produce, alongside Wilson), it should draw strong notices and international arthouse recognition. Twisting around a knife of romantic obsession, it confidently breaks with convention and is, coincidentally, a vindication of the ability of Britain’s tenacious independent sector to continuously innovate and challenge.

Wilson plays Kate, a single woman on the edge of her thirties: a time when the expectation of the outside world (disapproving parents and best friend played by Hayley Squires) is that she knuckle down and embrace her inner adult. Kate isn’t anywhere near living that life, though, She’s a sensual, impulsive, and bored woman marking time at a benefits job in the seen-better-days coastal town of Ramsgate.  Living alone, Kate is willing to grab at any straw that might give her some direction, and she finds it in the eminently unsuitable ex-con only known as Blond (Tom Burke), who turns up at her office one day and starts to flirt.

Kate was on the road to be fired from her dead-end job already - she’s just looking for something or someone to take her out of her life and her own insecurities (a claimant calls her a ‘fucking ugly bitch’ at the outset, and it’s clear a part of her believes him). She doesn’t know Tom, with his bad hair dye and v-necked jumpers and sexual intensity, but it doesn’t matter: she jumps right in. Spontaneous sex in a car park - although the film is frank enough to open with a scene of cunnilngus, there is never much flesh on display - leads to immediate obsession. Is her her soul mate? She allows him to gaslight and ghost her to the point where her world literally starts to crumble in.

Wootlif augments this story with a range of stylish flourishes which initially seem distracting — the focus pulls can be fast and frequent, alongside extreme close-ups, and that’s only the start of it, They ltimately bring the audience inside Kate’s head, however. Lovely camerawork from Ashley Connor establishes and moves Kate’s very world around. There’s some flirting with aspect ratios, too, and dreams-within-dreams. All in all, it’s the strength of vision which impresses — the confidence and the brio of a film-maker adapting a novel and losing herself inside it, making no apologies for her interpretation. Kate teeters on the edge - sometimes literally - and the film itself sits there with her, outside the comfort zone. Sequences including a party where she battles with her obsession, booze and drugs, or the end of an ill-advised date (all on the same night) have a thrilling sense of recognition. The climactic sequence on a dance floor is a raw delight.

Ruth Wilson, who optioned the book with Jude Law - Wootlif was brought on to the project - embraces all aspects of the challenge here and it’s a career best portrayal for the actor in what has already been an impressive career to date. Burke, too, can move from sensuality to sleaziness in the bat of an eyelid. They’re quite a team.

Wootliff has already been BIFA and Bafta-nominated for Only You. True Things is much more ambitious and, enjoyably, challenging. A forthright film like this isn’t for everyone. It’s easy to see it dividing awards bodies, in perhaps the same way as I May Destroy You failed to land at the Golden Globes or The Souvenir didn’t make the Bafta shortlist for Best British Festure. True Things doesn’t need that seal either - it will get the all the love it needs from audiences wherever it travels - much like Kate, whose destiny clearly lies beyond the benefits office of Ramsgate.

Screenplay: Harry Wootliff, Molly Davies from ‘True Things About Me’ by Kay Davies