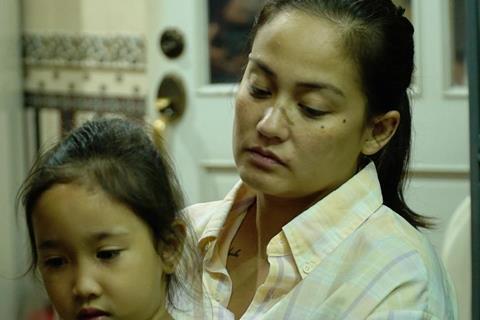 Writer/director Raymund Ribay Gutierrez shows no sign of first-timer nerves or showmanship as he steps up from his award-winning shorts Imago and Judgement to his debut feature – a no-nonsense domestic abuse drama that whips along with the pace of a thriller as he puts the Filipino justice system in the dock. Expanded from Judgement, it sees Max Eigenmann and Kristoffer King (in his final film role before his death, at just 36, this February) reprise their performances as Joy Santos and her violent husband Dante, whose latest drunken outburst hurts their six-year-old daughter Angel (Jorden Suan) and finally pushes his spouse to the limit. Badly beaten – but not before slashing Dante with a knife in self-defence – Joy scoops up their daughter and runs to a police station. As the bureaucratic wheels begin to turn, we follow her as she tries to report the incident and through ensuing trial.

Executive producer Brillante Ma Mendoza is also listed as “creative consultant” alongside his long-time collaborator Armando “Bing” Lao. But although the docu-realism favoured by both men is evident, like the pair’s previous protege Daniel R Palacio, whom they mentored to produce Underground in 2017, Gutierrez proves to have a distinctive voice. His swiftly flowing and female-focused narrative, which balances its underlying social issues with strong storytelling, should see Verdict gain a solid foothold on the festival circuit after its world premiere in Venice’s Horizons section and screenings at TIFF.

Gutierrez forgoes wide establishing shots in favour of hunkering down with his characters during the violent episode that kicks off the action. The kinetic, handheld camerawork from cinematographer Joshua A Reyles, who shot both Gutierrez’s short films, recalls that which he used in Mendoza’s Alpha, The Right To Kill. Rather than wallowing in the moment of violence itself, this approach immerses us in the emotional confusion of the characters and accentuates the speed at which this type of situation can escalate. This claustrophobic tension is maintained throughout, with almost every space in which Joy and Dante find themselves crammed with people, paperwork or both.

The close-proximity lensing also highlights how brutal the initial stages of the justice system are, with Joy forced to repeatedly share space with her attacker as she reports him and is treated for her injuries. Although there is some sympathy on offer, and Guitierrez is targeting failing processes rather than people, we’re acutely aware of how the patriarchal system pushes women to accept an ‘easy’ resolution – and a return to home life with the abuser – rather than take the matter further. Even the strict courtroom process is seen to be highly bureaucratic and easily manipulated, with Angel’s involvement in questioning proving particularly heart-wrenching.

King plays Dante with a loose disregard for everyone but himself, although Gutierrez rarely makes him the focal point, instead concentrating on the impact his actions have had not just on his wife and daughter but on his mother (Dolly De Leon), who finds herself scraping the money together to defend him.

The watchful camera allows Eigenmann to sell the trauma suffered by Joy as much through body language as dialogue, something highlighted by a scene in which she plays with her daughter and a make-up box, a moment of relaxation that serves as respite from what comes before and after. If Guitierrez opts for some sleight of hand in the film’s last third to bring about a resolution that is on the neat side, it only serves to emphasise the heavy toll taken by the justice system on those trying to navigate it, no matter what the outcome.