‘Waiting For The Barbarians’: Venice Review 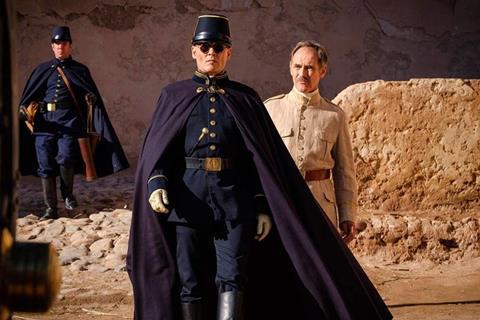 In the CGI era, it’s rare for novels to be described as ‘unfilmable’ in the way that they once were. Today, what truly makes certain works unfilmable is simply the fact that they really do not need to be filmed – and Waiting For the Barbarians, the 1980 work by Nobel laureate J.M.Coetzee, is one such case. Even with Coetzee himself taking care of the adaptation, and with acclaimed Colombian director Ciro Guerra (Embrace of the Serpent, the blazingly operatic Birds of Passage) at the helm, this film version has none of the parable-like resonance of Coetzee’s sparely poetic, politically charged creation.

Mark Rylance is effective in the lead, and it’s quite hypnotic to hear the cadences of the voice he adopts here

Despite meticulous visuals and a strong central performance by Mark Rylance, the film feels dramatically ponderous and emotionally inert. The headlining presence of Johnny Depp (not at his best) and Robert Pattinson (commendably solid in a small role) is unlikely to bring commercial lift outside upmarket art niches.

The drama is set around a desert fort, a frontier outpost of an unnamed empire on an unspecified continent; the period is a distant era where letters are written by hand on parchment-like scrolls and dark glasses draw attention as a new-fangled urban invention. The settlement is run by an unnamed magistrate (Rylance), a literate, peace-loving man who gets on with his job unobtrusively and spends much of his time puzzling over writings and artefacts of the local nomads, referred to by the officers of the Empire as ‘barbarians’ (as in the book, it’s a moot point who the real barbarians are).

One day an imperial police officer, Colonel Joll (Depp), arrives in a horse-drawn carriage and, after a courteous discussion with the Magistrate, starts questioning nomad prisoners, using draconian interrogation methods. The compassionate Magistrate, conscience pricked by his implication in Joll’s reign of terror, takes a protective interest in a young nomad woman (Mongolian actress Gana Bayarsaikhan, previously seen in Ex Machina and Wonder Woman) who has been left blinded and near-crippled by Joll’s officers. He tends to her wounds, gives her a job in his household and, it’s implied, begins a sexual relationship with her – something explicit in the book, but toned down here.

After the Magistrate leads an expedition into the neighbouring badlands to escort the woman home, he finds himself accused of treason by Joll and left to the tender mercies of police officer Mandel (a smoothly, discreetly unnerving Pattinson). This begins the Magistrate’s Christ-like martyrdom, as he is humiliated and made a pariah.

Coetzee’s economical filleting of his material results in a literate, streamlined text but also a somewhat theatrical register – the book was previously adapted by Christopher Hampton as a Philip Glass opera – with much of the film structured around a series of terse dialogues between the Magistrate and other characters. Rylance is effective in the lead, and it’s quite hypnotic to hear the cadences of the voice he adopts here; suggestive of a sensitive, world-weary English academic. It may be churlish to complain that his performance is one-note since finely modulated introversion is Rylance’s forte, but his character never rises above a certain highly decorous pitch.

Bayarsaikhan, meanwhile, gives a rather stilted and opaque performance, not quite bringing out a natural tone to her character’s rudimentary English. And Depp is altogether inert, playing Joll as a smooth-spoken martinet issuing silky menace from behind his shades, with a faint South African accent and some eccentric phrasing. Pattinson, thankfully, livens things up and Greta Scacchi has a brief, stalwart appearance, but the terrific Swedish character player David Dencik seems to have had his role removed in an earlier edit.

The film is most successful on the visual level, with Guerra and his design team finding intriguing solutions to the problem of creating an imaginary parallel world that remains readable as an analogy for contemporary instances of imperial and colonialist abuse, whether apartheid-era South Africa (the most obviously apparent interpretation for the novel when published), the mistreatment of Native Americans, or the uses of torture in the Guantanamo/Abu Ghraib era. But the book’s clarity is lost when its world becomes too visually striking, and it is easy to get distracted wondering whether the film’s locales (it was shot in Morocco and Italy) are more suggestive of 19th-century North Africa, Renaissance Tuscany or Asia; the nomads are depicted as Mongolian, and speak in the Mongolian language.

Some of the costume and other design, notably the police uniforms and coaches, introduce a jarring edge of steampunk, and Chris Menges’s photography is unfussy, sometimes highly atmospheric, especially in the landscape sequences. Hot desert tones speak to an Empire on the edge of its own sun-parched apocalypse, as an impactful final image suggests.

Screenplay: J.M. Coetzee, adapted from his own novel