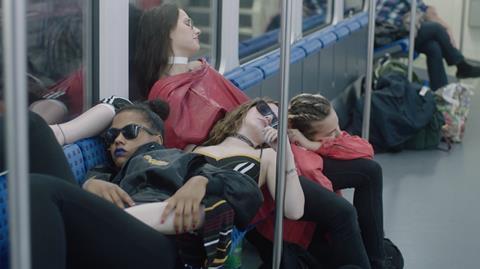 Four teenage girls experiment with drugs and sex, selling both to fund a spiralling party circuit in Berlin’s underworld. This first feature from actor Henning Gronkowski is based on both his own experiences, and those of the actresses and their friends. There is no doubting the authenticity of the world depicted, and Gronkowski eschews the traditional narrative arc of the drug movie which usually leaves at least one character dead from an overdose. But what’s also lacking is any sense of questioning, or of forward movement. The characters continue to drift throughout the film in a hazy K-hole purgatory. And while that may evoke the realities of Berlin’s club culture, it also makes for a repetitive structure.

The obvious comparison is with Larry Clark’s Kids

Tales of teen delinquency, particularly those featuring young women, are difficult to pull off without the tone lapsing into prurience or salacious shock tactics. Gronkowski counters this with the matter-of-fact and resolutely non-judgemental approach of someone who has lived the life he shows on screen. A protege of director Klaus Lemke, Gronkowski’s profile as an actor may pique audience interest in the picture with German speaking territories. Likewise, the presence of Victoria producer Anatol Nitschke on the credits will likely boost the film’s hip credentials. It’s a movie which is both about and for a specific generation, and as such, it may be that YUNG – the title is a slang term for something or someone that is cool or ‘dope’ – is best suited to distribution via a VOD platform rather than theatrically. Further festival exposure seems likely.

The obvious comparison is with Larry Clark’s Kids, although the film also has a kinship with the jaded hedonism of Eva Husson’s Bang Gang: A Modern Love Story. There’s an intimacy, too, and an insider’s eye which evokes the photographic work of Nan Goldin.

Gronkowski’s approach to the film blends documentary devices with more immersive, experiential segments. Each of the four girls, Janaina (Janaina Liesenfeld), Emmie (Emily Lau), Joy (Joy Grant) and Abbie (Abbie Dutton) talk to the camera in faux interviews in which they muse about the world they inhabit. The formal set up of the interviews contrasts with the wheeling, intoxicated camera which follows them as they pinball around the strobe-lashed dancefloors. Music, not surprisingly, is a prominent device, with Abbie composing and performing a rap which celebrates the friendship between the four, and pulsing techno proves an almost continual heartbeat.

The subject matter will be uncomfortable for some viewers, particularly those with children the same age as the characters. But for all the casual self-destruction and risky behaviour, one of the strongest elements in the film is its portrayal of the safety net of female friendship which, we hope, will catch the girls before they hit rock bottom.