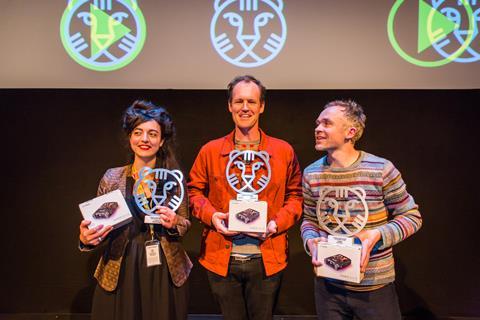 Each director wins €3,000 and a Canon digital camera.

Rivers previously won a Short Tiger in 2008 with Ah!, Liberty.

The jury said of its winners:

Things
“We chose this film, for its exquisite crafting and ambitious approach to the personal and the diarystic. For its toilet-humour, and the way in which the filmmaker successfully collapses style and rhythm.”

La Fievre
“For its poetic and human use of images and sounds to engage with complex political histories. Its feverish pace and arresting cinematography. Its ominous, hallucinogenic soundtrack.”

Greetings to the Ancestors
“For its complex approach to ethnographic filmmaking, its sensuous psychedelia, its self-reflexive and intricate weaving of voice and landscape.”

Our Body
“For its raw and direct confrontation with its own subject. Its interweaving of the literary and the philosophical, and compelling juxtaposition of the gentle and the abrupt.”