As the 20th edition gets underway, Sarajevo’s festival director talks to Screen about the birth of the festival during wartime and how it is looking beyond its borders for the future. 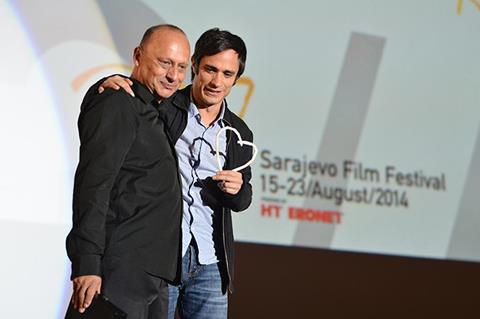 For those who weren’t there, it is hard to imagine the Sarajevo Film Festival’s first edition in 1995, when fighting raged across the city toward the end of a four-year siege by Serbian troops.

Back then, just 37 films were screened to 15,000 people, with portable generators powering projectors in a city without electricity and a donation of one cigarette used in place of currency to secure a ticket.

Now, celebrating its 20th edition (Aug 15-23), the festival is hosted in state of the art theatres and an impressive outdoor cinema, drawing a total of more than 100,000 cinemagoers and thousands of film professionals to see around 250 films from 68 countries.

Looking back, festival director and founder Mirsad ‘Miro’ Purivatra says: “The hunger for films was enormous. The people had gone four years with almost no connection to world cinema. They just wanted to be part of the world again.

“I will never forget the interest of the people, not only in seeing the films but also to speak to the guests.”

Directors Alfonso Cuaron and Leos Carax rode in armoured cars over the mountains that surround Sarajevo to enter the city under siege. Their film canisters were carried though the now famous ‘Tunnel of Life’, dug beneath the airport.

“People asked about the films but soon moved on to how the guests saw Sarajevo,” recalls Purivatra. “We are just a one-hour flight from Vienna, 90 minutes from Paris… but there was seemingly no reaction to what was happening during the four-year siege.

“The people of Sarajevo were forgotten as a civilised people and they wanted to know why they were being punished, forced out of film distribution.”

The second festival ended on the day the war was formally brought to an end by the Dayton Accords. It was then that Purivatra began to work with his team on creating the Sarajevo Film Festival as it is today.

But they were realistic in their planning. “We didn’t create a timeline of miracles to become the best festival in the region overnight,” says the festival director. “That is why we waited nine years to create a strong festival before launching our regional competition.”

It was also only after 10 years that a red carpet was laid out at the festival “to respect regional authors who were making films but not walking many red carpets elsewhere in Europe.”

Despite celebrating its 20th edition, there are still issues, most notably with “infrastructure problems,” according to Purivatra.

“The main problem is the city itself as there is no conference centre like Cannes’ Palais, which could help us build. It needs to be in the story of our future.

“The impact of the festival is clearly evident, not just from a financial point of view but also promotional, presenting a different picture of Sarajevo. That is priceless.”

While the festival has changed significantly, what has remained a constant is the human contact side of the event.

Mexican actor Gael Garcia Bernal is global star but talked at length with the young filmmakers of the Sarajevo Talents and took lunch with the rest of the guests.

Mike Leigh is an award-winning British director known the world over, but one guest told Screen how they met the filmmaker behind Mr. Turner at a festival dinner and ended up exchanging business cards.

“That isn’t the norm for many festivals and I see it as one of our biggest achievements,” says Purivatra. “We are still a ‘human-sized’ festival.”

Going forward, the festival director is looking to strengthen the programme both regionally and internationally.

On a regional level is the launch of the Avant Premiere scheme, intended to set up a strong market platform for films from across the Balkans in the hope that it will become a meeting place for film professionals from throughout the region.

“This was created to help generate stronger connections between producer, distributors and exhibitors on a regional level,” explains Purivatra.

Looking beyond borders, Purivatra adds: “We want to encourage more co-production with the rest of the world which is why we have a strong presence of professionals here from Mexico, India and the Middle East – to open new borders and new possibilities for collaboration.”

The Sarajevo City of Film Fund has been relaunched to support this and there will be further discussions at the annual Regional Forum later this week.

It was reported that the new head of Ukraine’s Odessa Film Festival had called Purivatra for advice on staging an event during a time of civil war. But what was said?

“It’s quite simple,” Purivatra says. “Culture has to stay out of politics. The director of the festival has to be open minded and not used by politicians.

“You can be patriotic and angry but in just a couple of years, that would look very wrong. Film has to be above politics but always open to discussion.”