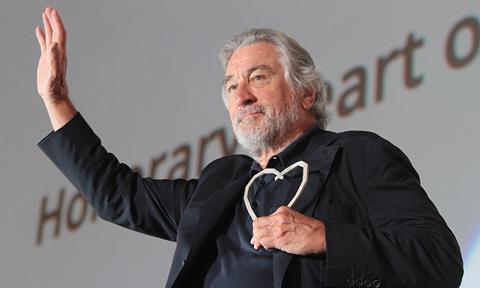 The 22nd Sarajevo Film Festival opened on Friday night [12] at its two flagship locations. The special guest of the festival Robert De Niro first officially opened the festival at the National Theatre, and then moved on together with festival director Miro Purivatra to receive the Honorary Heart of Sarajevo for Lifetime Achievement at the 3,000-seat Open Air cinema.

The ceremony in the theatre started with the host, Bosnian actress Alena Džebo, welcoming the guests and giving impressive figures of the 22nd edition’s film programme. Across 18 sections, the festival will screen 223 films from 61 countries, out of which 53 feature, documentary and short films will world premiere in Sarajevo.

Džebo then announced Elma Tataragić, the selector of feature and short film competition sections. Tataragić said: “In the feature, short and documentary competition programme, Sarajevo Film Festival will this year screen 42 films. In other programmes, another 70 films from the region will be shown, which makes the Sarajevo Film Festival the largest platform for promotion of regional cinema.

“This year’s competition continues to nurture and discover fresh talent and new tendencies in regional and world cinema. Six titles in the main competition are debut films.”

After Tataragić briefly described the titles in the feature competition, and gave a short overview of the short and documentary sections, it was time for what the audience in the National Theatre, and - as it seemed on the streets, all of Sarajevo - was expecting with great anticipation: to see and hear Robert De Niro.

First Purivatra came on the stage and quipped, “I’ve never seen the National Theatre this packed!”

He continued: “Ladies and gentlemen, dear friends, here we are to open yet another Sarajevo Film Festival edition. This is a very special opening night and I am sure it will stay in our memories for many years to come.

“This evening, with us is a very special and a very dear guest whom I had the privilege to meet in person 12 years ago at the Tribeca Film Festival, which he founded the year after 9/11. That was such an inspiring experience. Recognizing the same spirit in which we created the Sarajevo Film Festival, I felt at home there.

“I’m honoured to welcome our distinguished guest in Sarajevo now, and I hope he will enjoy it as much as I enjoyed Tribeca. Tonight we are celebrating his amazing work, presenting one of the most memorable characters he has created in his long-running career, with the film Taxi Driver. Now, please welcome on stage Robert De Niro.”

De Niro came from backstage to the standing ovation of the whole hall. As the crowd’s applause did not seem to abate, he thanked the audience three times, and as they finally set down, he read his speech.

“The Sarajevo Film Festival was born during a dark and dangerous time. It countered the butchery of war with celebration of art and humanity. Six years later, on September 11, 2001, my own city, New York, my own New York City neighbourhood, was attacked, and we started the Tribeca Film Festival as a gesture of hope, resilience and defiance.

“At the first Tribeca Film Festival, Nelson Mandela reminded us that film is an evocative tool for fostering an understanding, and through that, tolerance in the world.

“Miro, you honoured us in 2005 by being a Tribeca Film Festival judge, and I am honoured to be here with you, opening the 2016 Sarajevo Film Festival.”

After Purivatra and De Niro left the stage to another round of very loud applause, the audience had the chance to see the restored 40th anniversary version of Taxi Driver.

Half an hour later, the two got on the stage of the Open Air cinema, where 3,000 people were waiting for the legend of American cinema to receive its Honorary Heart of Sarajevo for Lifetime Achievement, given out this year for the first time.

After he was presented with the award and thanked Purivatra, De Niro read another short speech:

“I’ll treasure this award - my Heart of Sarajevo - because I don’t think there is another city in the world that has shown such heart in the face of so much tragedy.

“The Sarajevo Film Festival and New York’s Tribeca Film Festival are kindred spirits, both born out of acts of war, both looking to the power of art and film to unite us.

“It’s an honour to be your partner in this quest. Thank you!”

The evening continued with another screening of the 4K restored version of Taxi Driver.

On Saturday morning in the National Theatre, audiences and journalists will have the chance to listen to De Niro’s experiences as a part of the festival’s In Conversation section. He will be interviewed by Mike Goodridge, CEO of Protagonist Pictures.