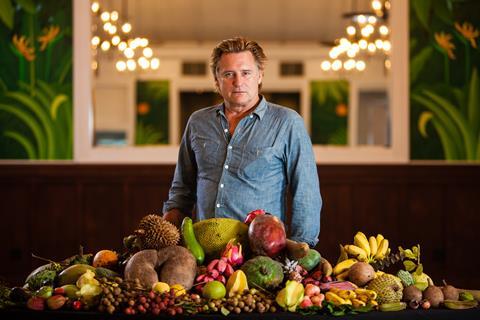 If ever a documentary would have benefitted from ‘smell-o-vision’ it is Yung Chang’s fascinating and rather tasty film, which is a filmic feast in a number of ways, and certainly makes any viewer want to head out of and wallow in the wonderful world of exotic – and even rather ordinary – fruit.

As well as following ‘fruit hunters’ as they criss-cross the world in search of new or lost variations the film also takes a few subtle digs at multinationals and monoculture.

Taking its inspiration from Adam Gollner’s 2010 book of the same name, Montreal filmmaker Chang (who made Up The Yangtze) travels the world in pursuit of some of the world’s most unusual, and often most tasty, fruit, drawing attention to its sensual nature while also celebrating those who have an obsession for growing and searching for fruit. The film screened at the Palm Springs Film Festival.

And while stars of the film are the fruit themselves, The Fruit Hunters even has a dash of Hollywood class, with actor Bill Pullman featuring prominently through the film. He is a fruit obsessed fellow – though admits to having lost his sense of smell – and tries to convince his neighbours to create a community orchard in the Hollywood Hills. He is a genial and charming personality, and in amidst the search for exotic fruits offers a nice sense of down-to-earth enjoyment for the product.

As well as following ‘fruit hunters’ as they criss-cross the world in search of new or lost variations (as one comments, “it is exhausting to love a mango”) the film also takes a few subtle digs at multinationals and monoculture, and the fact that many fruits that appear in supermarkets are grown in a ‘permanent global summertime’ and grown to look - rather than often taste - the part.

Chang also delves into the history of social impact of fruit. The fact that Haas avocadoes came from a tree owned by postman Rudolph Haas; Bing cherries named after Chinese immigrant Ah Bing, who was sent back to China from the US; clementines were grown by French missionary in Algeria Father Clément Rodier and that a Chinese emperor saw his dynasty ruined because of his concubine’s obsession with the finest lychees.

Where Chang makes a slight misstep is when he turns to actors and effects animation for a series of historical re-enactments, but while these scenes tend to hamper the flow of the film rather than enhance it they don’t detract from the fact that The Fruit Hunters is a fascinating and thoroughly enjoyable documentary that is likely to find a welcoming home at festivals around the world as well as intriguing niche distributors.