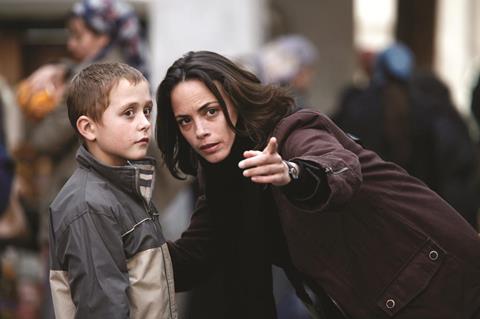 The roads to Grozny are paved with good intentions for Michel Hazanavicius. Making a film about the second Chechen war in 1999 was not an obvious follow-up to The Artist, but that film’s Oscar-winning success gave the French director the freedom and budget to co-produce, write, direct and co-edit The Search, “inspired by” Fred Zinneman’s 1948 film about an Auschwitz survivor searching for his mother across a ravaged post-War Europe.

Technical credits are strong and this is clearly a creatively and financially well-nourished film, with multiple well-mounted sequences involving tanks and explosions and fine work on costumes.

Chechnya is similarly destroyed in The Search, which shot on location in Georgia under cinematographer Guillame Schiffman. But for all that Hazanavicius clearly means well in an heroic attempt to illustrate the plight of these displaced Muslims, their cause so often linked to terrorism, The Search is painted with very wide brushstrokes, and, at 149 minutes, is indulgently long.  With Hazanavicius taking on so many roles in a more weighty enterprise than before, it can’t help but feel slightly hubristic – and a sad waste of an opportunity for all involved.

Hazanavicius, renowned for his comedies OSS-117 and its sequel as well as The Artist, goes all-out to make a statement with The Search – about war, Chechnya, the victims of the conflict, some of whom deliver real and moving testimonies direct to camera, the psyche of the Russian oppressors, and himself as a serious director. But he has structured the film into several leisurely plot strands and some of the more effective scenes are diluted in the stew of The Search’s sentimentality.

With Hazanavicius’s pedigree and Berenice Bejo in the leading role, The Search is highly marketable, although the film’s length, coupled with average word-of-mouth could prove a stumbling block. It opens in France in late November, and Worldview Entertainment holds US rights. The drama is mostly centred around a nine-year-old boy Hadji (Abdul-Khalim Mamatsuiev), who witnesses the callous murder of his parents and, he believes, his sister, at the hands of brutal Russian troops in the film’s effective opening sequence. He is left to try fend for his infant brother, whom he abandons on the doorstep of a Muslim family as he heads on the road to Grozny.

Mute for the most part, Hadji joins the refugee convoys and winds up at the Red Cross headquarters, where a brusque and over-worked Annette Bening is processing the orphaned children of the war. He also encounters Berenice Bejo as frustrated NGO worker Carole (similar to the role taken by Montgomery Clift in the Zinneman film). In the meantime, Hadji’s displaced sister searches endlessly for him, although their plight lacks a certain degree of urgency once he moves into Carole’s spacious apartment.

Separately, in Perm, a teenage Russian boy, Kolia (Maxim Emelianov), is caught smoking pot on the street and sentenced to serve in the Russian army. There follows a series of ritual humiliations and grueling punishments for the boy, as Hazanavicius attempts to examine the oppressors in Chechnya as well.  Although these plot strands are innovatively linked, they also feel like separate films for the most part, and some of the juxtaposition is clumsy.

Carole is not Bejo’s finest character and the actress is capable of far more subtle work than the role requires. She’s seen screaming on the telephone, frustrated by the slowness of the international community’s response to the crisis, and addressing the European Union in a desperate attempt to get the politicians to listen. It’s an overwrought performance in a film that struggles to get the tone right. Bening’s character, meanwhile, is like The Search itself – committed and serious but working too hard on too many fronts to be properly effective.

Of the performers, young Russian actor Maxim Emelianov comes out of The Search particularly well, having delivered a committed and authentic performance as a young boy traumatised by war into becoming a killer.

Technical credits are strong and this is clearly a creatively and financially well-nourished film, with multiple well-mounted sequences involving tanks and explosions and fine work on costumes. Music barely features, with the notable exception of the Bee Gees, the director preferring to state his case with his images. The stories of the victims are as authentic here as the locations in which the drama plays out, and The Search is, as Hazanavicius intended, a reminder of a war that has always been convenient for the West to overlook.

Scr: Michael Hazanavicius, inspired by The Search by Fred Zinneman.