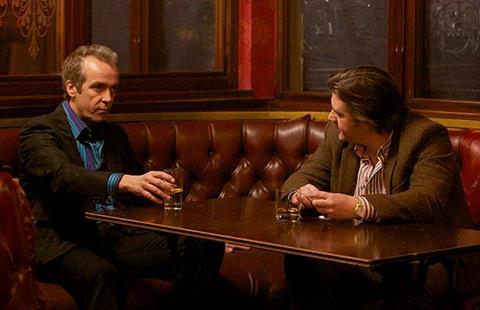 A strong central performance from Martin Compston is not enough to elevate The Wee Man beyond the status of just another swaggering, shouty, true-life crime story. Writer/director Ray Burdis co-produced The Krays more than twenty years ago but fails to recapture past glories with this clichéd, low-budget venture into similar territory.

The notoriety of lead character Paul Ferris, a reformed Glaswegian gangster, should ensure some interest in Scotland where the film receives a theatrical release in January but elsewhere The Wee Man is unlikely to make a big impact.

Burdis paints Ferris as a vicious gangster caught in a culture of dog-eat-dog violence that seems inescapable. A welter of flashbacks to his 1970s childhood reveal a smart, vulnerable young boy intimidated by local bullies. His decision to fight back gives him a first taste for blood.

Surrounded by corrupt policemen and blustering hard men, the quiet, calculating Ferris comes to the attention of Glasgow godfather Arthur Thompson (Patrick Bergin) and is caught in the internecine gang wars masterminded by Tam McGraw (John Hannah). Ferris makes frequent promises to go straight but never quite delivers on his better instincts.

Filmed in London rather than Glasgow, The Wee Man feels wearily familiar as repellent bursts of bloodletting rub shoulders with cod psychology and obvious dialogue. In a variable cast, John Hannah’s Machiavellian McGraw and Patrick Bergin’s velvety-voiced Thompson have their moments but only Compston’s wary, conflicted Ferris feels anything like a fully rounded character or a performance of substance.