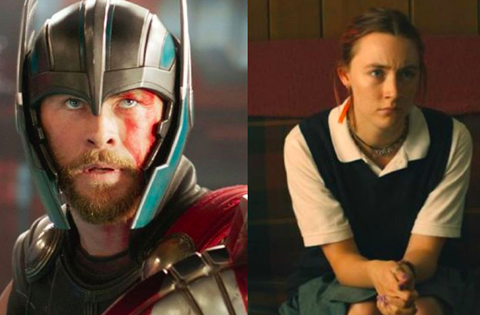 NOVEMBER 6 UPDATE: As uncertainty over the theatrical distribution arena continued to occupy attendees at a sluggish AFM, two films demonstrated how to play the game as Marvel Studios’ Thor: Ragnarok powered to the seventh highest November debut in history on $122.7m and A24’s Lady Bird scored a spectacular limited debut.

Thor: Ragnarok generated the fourth highest North American debut of the year-to-date through Buena Vista and its launch pushed the Marvel Cinematic Universe past $5bn in North America and $13bn globally.

A Bad Moms Christmas arrived in second place below expectations on $16.8m over three days in 3,615 venues for a 29.5% drop against the $23.8m three-day bow of Bad Moms in July 2016, and a 10.5% drop when the new film’s $21.3m five-day debut is taken into account. The R-rated sequel drew mediocre reviews and played best among women, who accounted for 82% of the audience.

Another sparkling limited debut from A24 saw Greta Gerwig’s feature directorial debut Lady Bird starring Saoirse Ronan open at number 26. The comedy-drama awards contender premiered in Toronto and delivered $364,467 in four venues for a $91,109 average. This ranks as the highest average for the year-to-date.

Box office is trailing 2016 by roughly 9% by the same stage. This weekend’s top 12 combined for $167.4m, up 173% on last weekend and down 8.5% against the comparable session last year when Marvel’s Doctor Strange opened top on $85.1m and DreamWorks Animations’ Trolls arrived in second place through Fox on $46.6m.