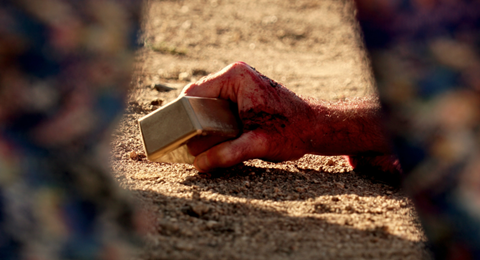 Let The Corpses Tan is the third feature from the Brussels-based couple after their cult ‘giallo’-inspired hits The Strange Color Of Your Body’s Tears and Amer.

Set against the blue seas and blazing sun of a perfect Mediterranean summer, the film revolves around Rhino and his gang of professional thieves.

They think they have found the perfect place to hide out and stash a haul of gold in a remote hamlet controlled by a female artist who moved there for inspiration.

“As usual, the film is shot in a beautiful S16mm Scope, for a genre western movie which takes place in stunning sets located in Corsica, Italy and Belgium,” said Commenge.

“Elina Löwensohn, Hal Hartley’s muse, and Stéphane Ferrara, a former boxer and character face of the French Nouvelle Vague, are co-starring in the film,” she added.

Bac – which previously handled The Strange Color Of Your Body’s Tears – has taken on international sales. Boutique distributor Shellac will distribute in France.

“We are really proud to continue working with Cattet and Forzani,” said Gilles Sousa, head of sales at Paris-based Bac. “They’ve proved to be fantastic directors, with great visual skills, and we believe Let The Corpses Tancould be a landmark for all elevated genre fans.”