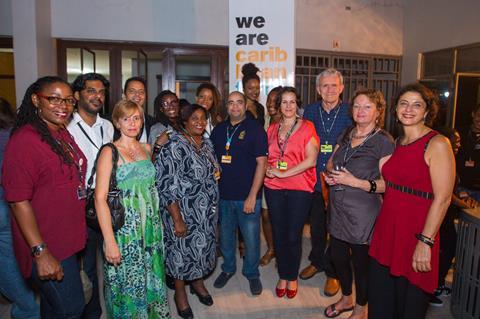 The inaugural Film Mart has enabled 30 film industry professionals from around the world to engage in one-on-one meetings with representatives from 15 Caribbean projects in development.

A programme of complimentary group events and activities are designed to provide additional support in finding means to get the films financed, made and distributed.

The Mart is co-funded by the ACP Cultures+ Programme and the European Union’s European Development Fund and implemented by the ACP Group of states.

It was established to address a lack of distribution and sales options for Caribbean filmmakers and information about the regional film industry.

“We had over 100 [applications] and we were really surprised,” Upczak told attendees at the launch party at HOME in Port Of Spain. “We selected what we think [are] the best of Caribbean voices right now and I feel assured that in the next three to five years that every single project that is in this Film Mart will be made.

“I would also like to acknowledge the 30 industry professionals who have had the courage and insight to get involved in a new movement. We really appreciate you taking this risk and coming down here and we really hope that we are doing you proud.”

ttff also unveiled the Caribbean Film Database, an online resource of feature-length Caribbean fiction, documentary and experimental feature films from the Year 2000 to the present.

The Database – in English, Spanish and French – includes a number of Caribbean classics, a bibliography of film resources, a Caribbean Women In Film page and links to other festivals, commissions and schools in the region.

The Caribbean Film Mart and Caribbean Film Database are being implemented in association with the Fundación Global Democracia y Dessarollo from the Dominican Republic, the Association for the Development Of Art Cinema And Practice in Guadeloupe, the Foundation of New Latin American Cinema from Cuba, and the Festival Régional et International du Cinéma de Guadeloupe.