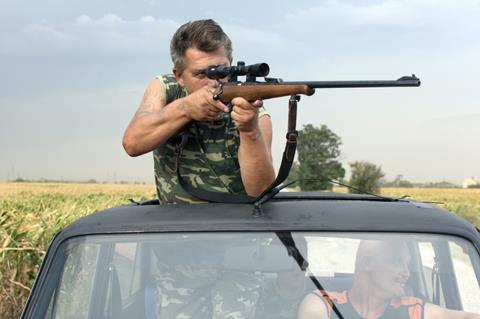 Some films are more fun to make than to view, and this may well have been the case with this wild experiment in what is not quite a mockumentary, nor really a fiction but certainly not a documentary. Though ostensibly a film about what happens to old terrorists today, the three directors who joined forces here are more interested in showing three people who may not be particularly clever or smart, but were brave enough, or maybe silly enough, once they disagreed with an oppressively corrupt system, to actually do something about it in their own naively clumsy way. They were not terribly successful…but at least they tried.

Somewhere in between terrorists, rebels, heroes and hopelessly innocent klutzes, the main characters of the film’s three episodes, may be all of that or simply normal people who had the guts to stand by their opinions and paid the full price for it.

Closer to comedy or satire than it is to either politics or drama, the self-indulgent wit of this light-hearted essay may entertain insiders who are capable of deciphering the deadpan winks and innuendoes addressed to them in the course of this film. But Velvet Terrorists’ (Zamatovi Teroristi) only hope to find wider audiences is in territories which have had similar unhappy experiences with the communist version of paradise, and therefore might grasp some of its intentions.

Somewhere in between terrorists, rebels, heroes and hopelessly innocent klutzes, the main characters of the film’s three episodes, may be all of that or simply normal people who had the guts to stand by their opinions and paid the full price for it. Each viewer is invited to decide for himself.

Stano (Stanislav Kratochvil) tried to blow up an official party tribune on May 1st but was far too clumsy to ever reach his goal and instead was condemned to 5 years in prison; Fero (Frantisek Bednar) took the trouble to contact foreign agencies who ignored him, before setting out on his own to shoot President Gustav Husak, but he was apprehended long before he could begin to put his plan into action and sent to prison for 14 years, and as for Vladimir (Vladimir Hucin), smarting after having served several undeserved stints behind bars, he blew up more than 50 Communist bulletin boards and was sentenced to another four years in jail.

Once the communists were ousted, the three of them, all sturdy, simple, no nonsense fellows, were released and the filmmaking trio tries to show how today. The old fire hasn’t still been extinguished in them, and given the same circumstances, might break out again at any time.

Today, Stano works on building sites, blind dates single women in the evenings and in between, drives around with his friends, all slightly tipsy, claiming to know what the world is all about and suggesting, for instance, that the best way for Stano to court a lady, is to throw a bomb in the lake, for at the sound of the explosion, she will have to jump, terrified, into his arms.

Fero may look like a respectable citizen in every respect, married and father of two grown-up sons, but he wouldn’t mind shooting a few villains from behind the wheel of his car. He teaches his wife to use a pistol and in his spare time, looks for the girl who used to be his partner in crime and has since cut him off.

As for Vladimir, the least tamed of the three, he runs a course for potential rebels and has at least one student he puts through arduous tests, just in case she will have to defend herself against some unpredictable danger. For dangers may change colors or flags, but they are always around.

The three directors apparently shared responsibilities on all three episodes, with Pekarcik contributing mostly on the cinematic side, Ostrachovsky as the weaponry expert, and Kerekes on the production. Most of their film seems to be staged to reflect today what their heroes were once. Though offering some inspired photography and lots of tongue-in-cheek humour, the film lacks the material to sustain a full-length feature without repetitions, incoherent moments and superfluous lengths.