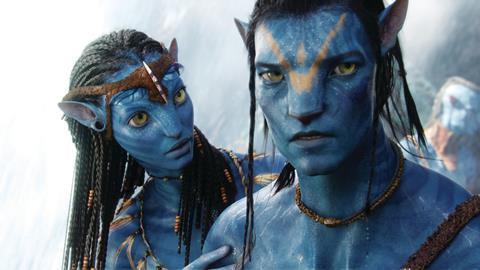 “Conceptually, a lot of it came from the underwater world because you don’t see a lot of that bioluminescence on land,” says Letteri, a four-time Oscar winner who moved to New Zealand nearly a decade ago to work for Peter Jackson on the last two films in The Lord Of The Rings trilogy and King Kong. “We looked at reefs, reptiles, birds and jungles.” They built thousands of plants in various degrees of wetness and decay.

“Technically and creatively it was a very big undertaking because you have to have a good understanding of the physical world to be able to mimic it. [Pandora] was so big we had to study global illumination and discover how the light would work there.

“The most challenging thing for us was creating the characters, especially Jake and Neytiri. You have to get the look right. Any character has to be vaguely human-like for the audience to relate to them, yet you need to imbue that alien quality. In this case, it was a very feline quality. It took about a year before they were ready to perform.”

One of the stars of the show is the virtual camera Cameron developed through his Lightstorm Entertainment. The motion capture involved the actors wearing lycra with markers on them, surrounded by props, so that when Cameron and the crew looked through the monitor they could see the tall, blue Na’vi race and elements of Pandoran world made real.

“Jim’s idea was to take motion capture out of post-production and put it right in there with the actors. It’s very immediate - you’re directing it as if you’re on set. This was the big conceptual breakthrough.”

The $385m global box office attests to the film’s winning success in pulling in fans old and new, but it took hard work and ingenuity.

Guyett worked closely with production designer Scott Chambliss, as they built life-size sections of the USS Enterprise on the Paramount sound stages and digitised the external space shots on all featured craft. Certain shots, for example the pipe-filled room where Scotty is first introduced, were filmed at the Budweiser Factory in Los Angeles.

“We put a lot of moving parts on the ship… so the Enterprise changed personality when it was in combat mode, for example. It was like designing an ocean liner. The Narada [the Romulan ship] had close to 10,000 light sources - it was a huge exercise in design and construction.”

The adrenaline-fuelled space jump scene was a challenge. “We did a ‘previs’ so we could talk about the beats beforehand,” Guyett says. “It starts off on a set with the guys in the shuttle and once they jump out they are CG characters. Some of the sequence in space we photographed at night with the guys hanging upside down on wires against a green screen.

“As they enter the atmosphere it’s a combination of CG versions of the guys and wire work,” he adds. “We built one-third of the drill platform (pictured) where the fight takes place and we flew the guys in on wires. All the parachutes in the sequence are CG.

“We created everything around the platform, shooting in the Los Angeles Dodgers’ car park so we could shoot against the blue sky whenever we could.
It was logistically one of the hardest sequences I’ve done but I’m very happy with it.”