'We Are Still Here': Review 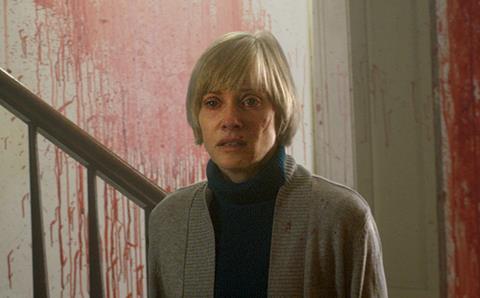 Sometime in the 1970s, Paul and Anne Sacchetti (Andrew Sensenig and Barbara Crampton), a couple still in mourning for their recently-dead college-age son Bobby, buy a suspiciously affordable 19th century home near the cosy community of Aylesbury, Massachusetts. When folksy Dave McCabe (Monte Markham) pays a welcoming call on the new neighbours, he recounts a creepy local story about the original owners – a body-snatching undertaker named Dagmar -  and his wife (Susan Gibney) presses a warning note into Anne’s hand before they leave.

Convinced that the spirit of Bobby has moved with them, Anne invites her hippie-ish friends Jacob (Larry Fessenden) and May (Anne Marie) to visit, hoping for advice about how to contact him.  However, there are angrier presences inside and out of the house, and it becomes apparent that a curse involving something called ‘the Darkness’ has been visiting tragedies on this locality for over a hundred years.

Writer-director Ted Geoghegan, who has scripted horror films of varying quality (Nikos the Impaler, Sweatshop, The Disco Exorcist), makes his directorial debut with this entertaining, if schizophrenic pastiche. The first half, like Ti West’s recent House of the Devil and The Innkeepers, evokes the slow-burning, creepy TV movies of the 1970s (Don’t Be Afraid of the Dark, Something Evil, Crowhaven Farm) with a quiet accumulation of ill-omens and a sense of picturesque, snowbound isolation.

Sensenig (Upstream Color) and genre veteran Crampton (immortalised in the severed head sex scene of Re-Animator) play numbed grief and quiet yearning, while prolific genre specialist writer-director-actor Fessenden and big-eyed Marie (Vampira in Ed Wood) import a looser, correct-for-the-period countercultural presence.  However, at about the half-way point, an afternoon séance raises the wrong ghost, allowing Fessenden to do an impressive possessed act, and the film starts to take after the gorier efforts of the 1980s, especially Lucio Fulci’s The House by the Cemetery (homaged in several character names), The Beyond and John Carpenter’s The Fog.

With still-smoking, burned-to-a-crisp zombies rampaging through the house and a selection of explicit, physical splatter effects, the mood shift ups the energy and makes for an entertaining if over-the-top finale.  Geoghegan establishes what seems to be a simple haunted house set-up but adds complications which make the outcome less predictable – at one point, Anne thinks she’s identified the ghost persecuting her family but is told that the spook isn’t the menace she really has to worry about, as demonstrated by a bravura siege finish that daubs the walls with blood and casts the marble-eyed monsters in a different light.

The pleasantly mature Crampton and Sensenig underplay sensitively, giving a little depth to their plight, but this is likely to be remembered more for its excesses than its subtler touches.