James Cameron’s substantial use of New Zealand for Avatar and intention to settle there permanently speaks volumes for the territory’s film-making capability and the allure of its lifestyle. 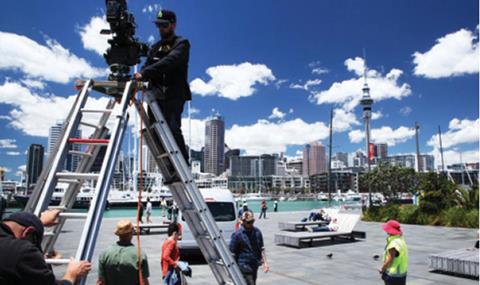 Wild, rugged environments now share the limelight with New Zealand’s knack for digital creation of imaginary worlds and creatures. Other drawcards are generous financial incentives and crews that have honed their skills on Peter Jackson’s blockbusters.

The leading production hubs are Auckland in the north, capital city Wellington, and Queenstown and surrounds on the South Island. In the last year New Zealand has hosted Disney family adventure Pete’s Dragon; Legendary Pictures’ feature Krampus for Universal; Light Between Oceans for DreamWorks SKG; Crouching Tiger Hidden Dragon: The Green Legend for The Weinstein Company; the Thunderbirds Are Go! remake for ITV; The Shannara Chronicles for MTV; series Ash vs Evil Dead for Starz; and Power Rangers Dino Charge, a further instalment in the Saban franchise.

New Zealand has opposite seasons to the northern hemisphere so offers snow in July and golden wheat fields in February.

An uncapped (cash) grant, equivalent to 20% of qualifying New Zealand production expenditure (QNZPE), is available if the QNZPE is more than $10m (NZ$15m) for features and $2.6m (NZ$4m) for television. An additional 5% is subject to an economic benefits test. Further information www.filmnz.com/financial-advantages/international-incentives

Five-star hotels, luxury lodges and boutique hotels abound, with houses and apartments hired for longer stays. Popular luxury hotels in Auckland include The Langham and Sofitel. In Wellington, the Museum Art Hotel impresses. Heritage Hotels is a reliable boutique brand.

Whether it is the background to a hiking adventure or just observed through a car window, the scenery is bewitching. The food and wine are also exceptional. Favourites include the Auckland’s Britomart district, Wynyard Quarter or Ponsonby Road; Wellington’s Cuba Street; and Queenstown’s Cafe Vudu and Amisfield winery and bistro.

New Zealand is a compact country, only slightly bigger than the UK. Both main islands have international airports and short flights connect the regions.

“I love the spirit and ingenuity of the crews. The facilities such as Stone Street Studios, Park Road Post and Weta Digital are the type of world-class facilities you come to depend on to deliver ground- breaking films. The exceptional co-operation we received from the forestry industry and a timber mill allowing us to operate as though we were on a backlot was essential to both our creative vision and the safe execution of our production plan. The assistance from Film New Zealand and the communities of the greater Wellington region — Rotorua, Tokoroa, Tapanui, Gore and Invercargill — cut through red tape and made us feel at home.”