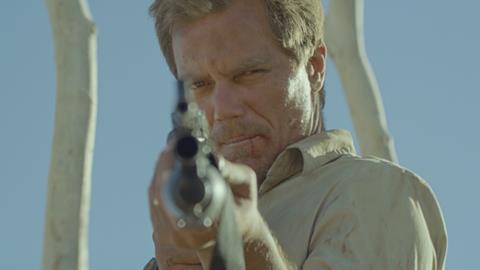 As bone-dry as the harsh environment where its characters live, Young Ones gives us a futuristic Western so bleak that its pitiless tone becomes downright mesmerizing. Bolstered by stripped-down performances from Michael Shannon, Nicholas Hoult and Kodi Smit-McPhee, writer-director Jake Paltrow’s study of some desperate individuals trying to survive in a society where water is scarce and the land is barren doesn’t offer much beyond its Old Testament-like tale of death and retribution. But that’s more than enough when confronted by Young Ones’ distinctive and peculiar vision of a world wasting away to dust.

Fans of Shannon should especially be interested in Young Ones, which debuted in Sundance’s Premieres section. Flaunting few overt action scenes, the film will be relegated to speciality markets, with VOD an attractive complement to theatrical, where audiences can really savour the spare, striking cinematography of Giles Nuttgens.

Set in an unspecified future somewhere in what is probably the American West, Young Ones focuses on the plight of the Holm clan, led by taciturn patriarch Ernest (Shannon). Surrounded by his loyal son Jerome (Smit-McPhee) and rebellious daughter Mary (Elle Fanning), who wants to run off with her insolent boyfriend Flem (Hoult), Ernest remains hopeful that these dry lands will one day grow crops again when rains eventually come. Sadly, this optimism is not shared by those in the community, who have reverted to an almost post-apocalyptic form of bartering and stealing to stay alive in such punishing terrain.

Paltrow, who previously made the comedy The Good Night, depicts this nameless land as a new-style Old West in which frontier justice rules and good, quiet men are constantly in battle with despicable outlaws. Shannon’s Ernest is one of those rare good men, but he’s far from flawless, struggling to overcome a drinking problem that caused his wife (for unrevealed reasons) to become a cripple. (As a sign of the film’s expertly no-fuss vision of the future, the wife is fitted with an exoskeleton that’s short on flash but thoroughly believable.)

In recent years, Shannon has courted self-parody in films like Man Of Steel and Premium Rush, playing exaggerated villains that utilize his frightening intensity. Happily, his performance as Ernest brings him back to the slow-burn steeliness he exhibited prior to becoming a breakout star. The character is stoic, commanding but also deeply pained, burdened by the weight of keeping his family together, and Shannon is up to the task of portraying this flinty hero.

At first, Young Ones risks being a self-consciously quirky reimagining of the Western, breaking the narrative up into chapters and using slow zooms that are reminiscent of American films of the 1970s, a high-water mark for Hollywood creativity. But a little patience reveals that Paltrow has a clear idea for the look and feel of this world and his story, which has elements of Greek tragedy and Biblical parables to it. And unlike many films concerned with vaguely post-apocalyptic landscapes, Young Ones isn’t meant to be a metaphor for our times or a dire warning about humanity’s worst instincts. Quite the contrary, the film is blessedly free of symbolism or import: It’s simply a stark story told with a slow, grim pace that builds to a stunningly simple payoff.

Not that the telling is particularly inventive. The main tension comes from Flem’s nefarious plan to acquire Ernest’s land, seeing an opportunity that he can exploit thanks to his well-connected father. Paltrow’s script doesn’t contain many bold surprises — except for perhaps one about halfway through — but in their place there’s a meticulous attention to the characters’ competing agendas and desires.

Smit-McPhee, who has some experience with bleak environments from playing the frightened son in The Road, is serenely arresting as Jerome, an ineffectual young man who must grow up fast when his family’s safety is threatened. And as Flem, Hoult is pure menace, hiding his sinister intentions behind a slick, slimy smile. Fanning’s role isn’t as substantial, but in some ways that’s in keeping with Paltrow’s subtle skewering of male codes of behaviour — in the world of Young Ones, men must fix all the problems since they’re the ones who caused them in the first place.

Special kudos must also go out to visual effects supervisor Ditch Doy and composer Nathan Johnson. Though presumably working with a low budget, Doy has crafted a future with robotic beasts of burden that are quite impressive. As for Johnson, he has put together a score that evokes the barren plains of the Western while also adding a slight melancholy accent. Shot on location in South Africa, Young Ones feels cut off from time without much showiness, the perfect complement to these stony, determined characters.