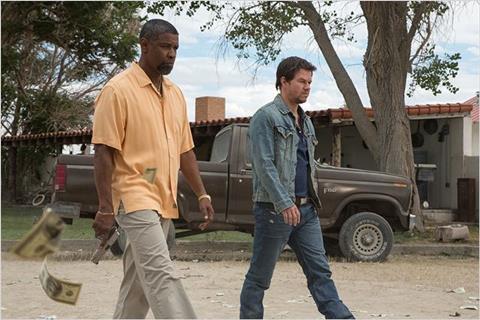 An agreeably down-and-dirty vibe only goes so far in 2 Guns, an action-comedy-thriller whose nasty attitude is both its chief selling point and its most overdone element. This diverting B-movie gets some spark from the feisty rapport of leads Denzel Washington and Mark Wahlberg, but this tale of crooked lawmen, stolen loot and dangerous drug lords gets so convoluted that its attempts to be a harder-edged, amoral entertainment get lost amidst the uninspired execution.

While 2 Guns doesn’t boast any standout action sequences, it does have a pulpy urgency and a hit-or-miss smartass demeanour.

Hitting US theatres August 2, 2 Guns will try to find a niche in a marketplace that will be crowded by comic book fare (The Wolverine) and sci-fi action (the forthcoming Elysium). The film’s R rating will eliminate the possibility of younger teen viewers attending, but considering that Washington’s and Wahlberg’s fan bases skew older, that liability may not be a deal-breaker on the theatrical side. Still, modest returns are probably realistic for a movie without an original hook or easily recognisable source material.

2 Guns is based on a series of Steven Grant graphic novels that concern Bobby (Washington) and Stig (Wahlberg), who are low-level Texas criminals in league with a Mexican drug kingpin named Papi (Edward James Olmos). What the two men don’t realize, however, is that they’re both working undercover: Bobby for the DEA, and Stig for Navy intelligence. But when a sting operation involving a small-time bank heist nets them far more money than they anticipated, Bobby and Stig reveal their true identities, only to discover that they’re now being targeted by their bosses, not to mention the cartel.

Directed by Baltasar Kormakur (who previously made the Wahlberg-starring Contraband), 2 Guns has a certain integrity to it that other violent summer movies this year don’t. Though it’s not overly gory, the film (with its R rating) treats its bloodshed and killing with an adult frankness, as compared to the soft-pedalling that occurs in PG-13 films that generate tons of carnage while keeping the actual dying off screen. Though it certainly has its cartoonish elements, 2 Guns generates much of its suspense from the genuine threat constantly looming over Bobby and Stig, most noticeably in the form of the ruthless Papi and a coldly sadistic CIA operative played with Southern backwoods menace by Bill Paxton.

For a little while, the odd-couple pairing of Washington and Wahlberg has its pleasures, especially with Washington revelling in portraying a no-nonsense, not entirely sympathetic drug cop. (As in Safe House and Flight — two very different films — Washington in 2 Guns plays a taciturn, compelling figure who gets by on his indestructible swagger.) With Washington as the cool, calm presence, Wahlberg’s job is to be the hothead, and his Stig can be seen as a variation of his satiric turn in The Other Guys. (Like that film, 2 Guns is something of a send-up of buddy-cop movies, mocking the back-and-forth bickering that usually goes on in such films.)

Unfortunately, the movie’s stab at being truly dark loses momentum fast. The gleeful nastiness and barren desert landscapes may recall Tarantino mixed with a little Coen brothers, but 2 Guns lacks the striking characters and indelible sequences that are hallmarks of those filmmakers. Additionally, 2 Guns isn’t especially funny: Its sparring main characters and “shocking” moments of violence are awfully pedestrian. But what makes the attitude especially tiresome is that 2 Guns parades its cold-blooded brashness like a badge of honour, never realizing that a genuinely heartless neo-noir would never be so self-conscious as to call attention to its jet-black tone.

Still, Kormakur keeps things moving along at a measured clip as Bobby and Stig get to the bottom of why all this unexpected money was sitting in such a modest bank. While 2 Guns doesn’t boast any standout action sequences, it does have a pulpy urgency and a hit-or-miss smartass demeanour. And the supporting players all are rather memorable: Along with Paxton, there’s also Paula Patton as a DEA agent and Bobby’s sometimes-girlfriend, Olmos really digging into his character’s scummy evilness, and James Marsden as Stig’s smug boss who quickly reveals his true agenda.

For a movie with such pungent characters and arresting locales, 2 Guns suffers badly from a script (credited to writer Blake Masters) that makes Bobby and Stig’s mission to clear their names and get out alive increasingly complicated in an unsatisfying way. The warring factions who are after the money tend to be handled perfunctorily, the two men’s relationship barely evolves, and the film could probably stand to lose a plot twist or two. 2 Guns positions itself as a grittier breed of action movie—too bad it’s not necessarily smarter.

Screenplay: Blake Masters, based on the graphic novels by Steven Grant